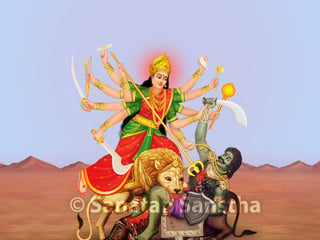 A deity who favours spiritual progress like the family deity (kuladevata) or the Name of a deity given by a Guru as initiation (gurumantra) is called a benevolent deity. However an average individual considers a favourite deity or a deity which endows worldly benefits as a benevolent one. Deities who cause harm are called harmful. Shankar, Vishnu, Parvati, etc. are benevolent deities whereas spirits, demons, etc. are harmful ones.

1.2 Deities worthy of worship and those unworthy of it

Chant Shankar, Ganapati or any one of the Names of Vishnu like Narayan, Keshav, etc. for one minute. Repeat the same with Prajapati or Brahma. Decide with which Name you feel pleasant or distressed. Only then read further.

Deities like Shankar, Vishnu, Parvati, etc. are living whereas those from Nature like the sun, mountains, rivers, etc. are non-living.

Chant Vishnu, Shankar or Ganapati for one minute. Then chant anyone of the following yaksha (demigod), gandharva (celestial musician), kinnar (celestial singer) or the name of one of the apsaras (celestial beauties) Menaka, Rambha, Urvashi, Tilottama, etc. for one minute. Note with which Name you feel pleasant or experience distress. Only then read further.

Since everyone cannot give answers from the subtle dimension all the people at the workshop cannot participate in such experiments. Yet one thing that it emphasises is why Vishnu, Shiva, Ganapati, etc. are called superior deities and yakshas, gandharvas, kinnars, apsaras, etc. are called subordinate deities. Undertaking spiritual practice of such subordinate deities can cause distress. That is why temples of these deities are generally not constructed.

Based on references in holy texts one can determine when a deity has originated, in the Vedic, post-Vedic or Pauranic period.

The Vedic range of deities includes groups of deities some of which are more elaborately described than the others. All of them however are associated with a specific deity. The largest and most important group among these is that of the maruts. In the Rugveda they are said to be either 21 or 180 in number. The maruts are associated with Indra and Rudra. The attendants of Rudra (rudragans) also form a group of deities and are 11 in number. The group of adityas consists of 7, 8 or 12 members and is seen accompanying its mother, Aditi. The Brahman texts say that three groups of deities namely – vasus, rudras and adityas reside on the earth, in absolute ether (akash) and heaven respectively. Apart from these there is a group of angiras’ and rubhus. The Rugveda mentions another expansive group of deities called Vishvedev.(2)

1.7 According to the mission

A. Those controlling activities in the universe.

C. Those who do not participate in controlling the universe, yet help man because of their love for him.

The Rugveda classifies two categories of deities based on an undefined concept or spiritual emotion (bhav). The first category includes the deities Kama, Manyu, Shraddha, Aditi, Diti, etc. In the mandals of the Rugveda created during a later period even idols of these deities have been created. The second category is of deities with names ending in the case tru, e.g. Dhatru, Tvashtru, etc. The second category is larger than the first.

In Vedic spiritual practice a special type of worship consists of praise of two basically independent deities who are believed to form a pair. About twenty such pairs of deities are included in the Rugveda and there are atleast sixty aphorisms (suktas) in praise of these pairs of deities, e.g. Indragni, Mitra-Varun, etc. Some examples of such pairs created during the Pauranic period are Brahma-Prajapati, Shiva-Vaishravan, Sankarshan-Vasudev, Nara-Narayan, Skanda-Vishakh, etc.

A retinue of deities is a group of deities associated with the main deity and which if required serve the main deity. Lakshmi, Bhudevi, Shridevi, Garud, Vishvaksen and the instruments in Vishnu’s hands have been accorded the status of members of Vishnu’s retinue. Similarly Skanda, Ganesh, Nandi, Chandesh, Virabhadra, Bhairav and guardian deities (kshetrapal) are members of Lord Shiva’s retinue. The seven matrukas such as Brahmya, etc. as well as several fearsome deities are included in the family of the female deity (devi) or Divine Energy (Shakti).

There is a concept of a species in between man and deities. There are several sub-groups in this species namely vidyadhar, celestial beauties (apsaras), demigods (yakshas), demons (rakshasas), celestial musicians (gandharvas), celestial singers (kinnars), confidants (guhyak), spirits (pishach), saints (siddhas) and ghosts (bhut). These beings are less powerful than deities but have miraculous powers and are more powerful than man. That is why they are referred to as superhuman. These groups of deities live in between deities and man and maintain contacts with both. The common features of these groups of superhuman deities are –

A. ‘Divine deities : The deities Dyauhu, Varun, Mitra, Surya, Savita, Pusha, Vishnu, Vivasvan, Adityagan, Usha and Ashvi are included in this group. Dyauhu is the deity of the absolute ether (akash) element. She has been associated with the earth. Dyava-Pruthivi is a word which symbolises the parents of the universe.

2. Deities and the worlds

The universe has infinite worlds (brahmandas). When there is dissolution of one brahmanda there is creation or sustenance of another. Brahma, Vishnu, Mahesh and other deities of each brahmanda are different. However, all the worlds have the same Supreme God (Parameshvar) and God (Ishvar).

3. Deities and the five cosmic elements

4.4 Even and odd numbers of dates (tithis) and manifestation of energy

Despite this, on the even dates of chaturthi (fourth day) and dashami (tenth day) of the Hindu lunar fortnight, Divine Energy is more active. On chaturthi, ashtami (eighth day), dashami and paurnima (full moon day) the 360 and 108 frequencies form a specific angle; hence frequencies of deities reach the earth in greater amounts. Ashtami is one such date when the active Divine Energy is equivalent to that on an odd date. This is a special feature of ashtami. Though Krushna, an incarnation of The Lord was born on ashtami the Divine Energy in Him was completely manifest. [On ashtami in Maharashtra the female deity manifests in some ladies and they perform the ritual of ghagari phunkane (blowing pots)]. The fact that Divine Energy is more active on odd dates will be clear from the following two illustrations.

4.5 Active deities in the Kaliyug

The female deity (devi), Datta and Maruti are active deities in the Kaliyug. Hence distressing energies are ineffective at Their seats of worship.

4.6 Standard measurement of time according to deities