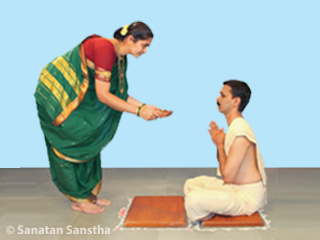 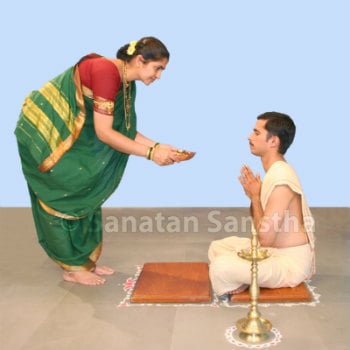 Bhai dooj or Yamadwitiya (also called as bhaubij) is celebrated on the 2nd day of the bright fortnight of the Hindu lunar month Kartik and it comes after the 4th day of Diwali. This festival is celebrated as a symbol of Divine bond of love between brother and sister.

In reality, Bhai dooj is not a part of Diwali (Festival of lights); but altogether a different Holy festival.

The second day (Dwitiya) of the bright fortnight of Kartik is also named Yamadwitiya. This day is widely known as Bhai dooj. On this day, Deity Yama (Deity of Death) visited His sister, Yamuna for a meal. Hence the day has acquired the name Yamadwitiya.

Significance : On this day, Yamadev (deity of Death) has full control over hell and is in charge of the region of Death (Mrityulok). He also prevents negative energies from moving in various planes (lokas) and keeps a check on them. On this day, waves emanating from Yamadev travel through various layers of hell and keep matters in place. This keeps the effect of negative energies from hell to a minimum on this day. Hence, on this day, ritualistic worship of Yamadev is done to express gratitude. He is welcomed in the evening by lighting earthen lamps. Prayers are made for a long life.

– A scholar through the medium of Pujya (Mrs.) Anjali Gadgil.

How is bhai dooj celebrated?

It is said that on this day, men should not eat meal cooked by their wife. They should visit their sister, gift her new clothes, ornaments, etc. and have a meal at her place. If they do not have a real sister, then they can go to any female cousin’s place or consider any other woman as his sister and have meal at her place. On this day, as Yamaraj visits His sister for a meal, the souls suffering in the hell are liberated at least for a day.

If a woman does not have a real brother, then considering any man as her brother she should perform the act of moving lit lamps around his face (Arati). If that is not possible, then she can consider the Moon as her brother and perform arati for the moon.

The ritual of tarpan is performed (Offering of water to God, Sages, ancestors’ souls and human beings) reciting the fourteen names of Deity Yama accompanied by a sankalp as, ‘श्री यमधर्मप्रीत्यर्थं यमतर्पणं करिष्ये ।’. This ritual is explained in the panchang. On this day, lamps should be offered to Deity Yama. Deity Yama is the Deity of death and Dharma. There should be a constant awareness that every human being is destined to die; only then will there be no wrong deeds committed or money wasted. Hence, after deepdan to Deity Yama, pray thus – “O Deity Yama, like these lamps, we will remain alert and vigilant. Accept this lamp, which is the symbol of alertness and vigilance. We do not know when You will arrive; hence we keep our accounts up to date, so that we do not have to worry about any unfinished accounts; for we are aware that You can arrive any time.”

Spiritual significance of worshipping Deity Yama (The Deity of Death)

On Dhanatrayodashi, Narak Chaturdashi and Yamadvitiya, Yamaraj, the Deity of death should be worshipped to prevent untimely death (apamrutyu). An offering (tarpan) should be made to Him while chanting His fourteen Names. This results in averting an untimely death. The offering is made with the resolve (sankalpa) with a prayer, ‘O Yamaraj, I am making this offering unto You.’