Hindus should offer gratitude to Shrikrushna for this success ! 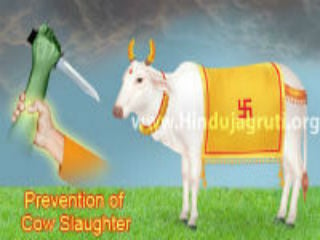 Pune : 40-50 big animals are slaughtered everyday at Idgah slaughter-house which is under the jurisdiction of Bhiwandi-Nizampur Municipal Corporation (BNMC) and 5000 to 10000 litres of contaminated water is released by it in River Kamavari flowing next to it. It is thus causing lot of air and water pollution; along with killing of animals. Pollution Control Board (PCB) has been dillydallying to take any action against the slaughter-house. After lot of follow-up by Supreme Court, PCB had issued order in February 2014 for closure of this slaughter-house. The slaughter-house was, however, operated showing total disregard to the PCB’s order and the officers of PCB were visiting slaughter-house, making notes and completing formalities of writing letters to the slaughter-house.

Hindu Vidhidnya Parishada (HVP) took up this matter and made an appeal to so-called social organizations and their members to join the drive since it concerned pollution control. HVP received no response from them and decided to take up the issue on its own by filing a petition.

Shri. Dharmaraj Chandel, a devotee of H. H. Asaramji Bapu and member of HVP filed the case with National Green Tribunal at Pune and attended hearing by twice going to Pune from Delhi. He pleaded for the case before the Tribunal. On 2nd February during the hearing of this case, the Tribunal has made observations that ‘BNMC’ has failed to close the slaughter-house at Idgah; it has not even paid the amount of bank guarantee of Rs. 4 lakhs and none of the concerned offices seems to have taken any action in this context. Strict action should be taken against this slaughter-house within 2 weeks for its closure; disconnecting supply of water and power and other amenities should be withdrawn; else we will have to issue warrant against the concerned BNMC officers. The PCB should also take further action in this regard.

Necessity of contribution by Hindu advocates in Protection of Hindu Dharma

How advocates can help many pro-hindu organisations ?

‘Hindu Vidhidnya Parishad’ (HVP) is a voluntary organisation of nationalist and devout Hindu Advocates. Hindu Advocates drew inspiration from the ‘All India Hindu Convention’ organised by Hindu Janajagruti Samiti and established this Parishad. The Parishad is working towards ensuring justice to the Hindus through legal means.