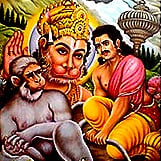 Friends, this story is from the Mahabharat era. We know that in the Mahabharat era, King Pandu had five sons Yudhishthir, Bhim, Arjun, Nakul and Sahdev. These five brothers were called Pandavas. Bhim was most powerful among the Pandavas. He became very proud of his strength. He felt that there was no one in the whole world who was as powerful as him. Due to this, he considered himself to be superior to all.

Due to his arrogance, he was being harmed. Lord Krishna knew this. To shatter his arrogance, God created a very interesting situation. One day when Bhim was passing through a forest his feet collided with some object. When he looked carefully he found that it was a tail of a monkey. When he followed the tail, he found an old monkey sitting under a tree. The monkey’s tail was lying on his way.

Bhim addressed the monkey and arrogantly said, ‘O vanar, move your tail from my path, I have to go ahead’.

The vanar slowly turned his face towards Bhim and said, ‘I have become very old and am also ill. I don’t have the strength to even lift my tail. You seem to be very strong. I beg you, please shift my tail aside and proceed on your way.’

Hearing this, Bhim got very angry. Again he said, ‘O vanar, I will not touch your dirty tail, quickly remove your tail from my path’.

The vanar said, ‘brother, I am very weak, I will not be able to lift my tail. Please shift my tail with your mace’. Then Bhim replied, ‘What if my mace breaks your tail?’

The vanar laughed and said, ‘And what if your mace breaks while shifting my tail?’

Bhim realized his mistake. He understood that it was not an ordinary vanar, since he was not able to move the tail even after using all his strength. Immediately, Bhim fell at the vanar’s feet and  with folded hands asked the vanar, ‘Lord, you are not an ordinary vanar. Who are you? Kindly introduce yourself’.

The vanar said, ‘I am Shri Ram bhakt Hanuman’. As soon as He said this, Hanuman ji appeared before Bhim in a gigantic form. Bhim bowed to Hanuman ji and said, “Forgive me Mahabali (the mighty one), I could not recognize you, I had become very proud of my physical prowess. You have shattered my arrogance”. Hanuman ji forgave Bhim and blessed him.

Friends, what have we learnt from this story? We should never be arrogant about our qualities. We have heard the saying, ‘Pride comes before a fall’. God also doesn’t like those who are very proud of themselves. Bhim also was very proud. God had to shatter his arrogance by using Hanumanji as a medium. Friends, you now