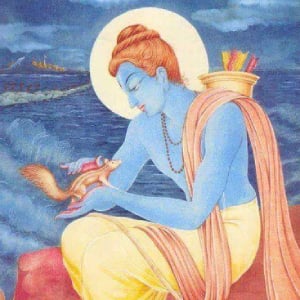 This was the time, when Shriram was going to Lanka to rescue Sita Mata who was held captive by Ravana. He reached the seashore with the vanarsena. The only way to reach Lanka was to cross the sea. But crossing the sea was difficult. There was no means to cross such a big sea to reach Lanka. Shriram prayed to the Samudra dev (God of the Seas) to give way so that they could reach Lanka. But Samudra Dev did not pay heed to the prayer. Three days passed by. Shriram was angry on Samudra Dev as He had not given the way. Hence Shriram decided to evaporate the sea, so He took His Agni Astra and pointed it at the sea. Seeing this Samudra Dev appeared. He apologised to Shriram. Shriram was merciful. He forgave Samudra Dev. Samudra Dev suggested that the vanarsena should build a bridge of stones to reach Lanka. Vanarsena and Hanuman decided that they would build the bridge with stones and cross the sea. Each and every monkey wrote Shriram’s name on the stones and started immersing the stones in the sea, while chanting the Lord’s name. The stones with Shriram’s name written on them started floating and within a few days the bridge was completed.

While all the monkeys were building the bridge, a small squirrel was watching them. The squirrel thought that Shriram is an incarnation of the Supreme Lord himself. The monkeys are building a bridge for Him. This a form of service to Shriram, even I should contribute in this mission. With this thought the squirrel bowed down to Shriram’s feet in its mind and started doing its service. There was a heap of sand near the seashore. The squirrel would go to the heap of sand, and with its tiny hands and tail, it would collect small stones and sand and put them into the sea. It was trying to serve Shriram to the best of its abilities. Seeing this monkeys were surprised. One of the monkeys went up to the squirrel and asked “You are so small and you are putting grains of sand into the sea, do you think that the bridge would be built by you doing so?” The squirrel replied, “Brother, I may not be able to lift big stones or do as much service you are doing, but with whatever ability Shriram has given me, accordingly I can do a little service. You might find my services small, but a service to the Lord is being rendered. Please let me do my service.” Saying so the squirrel went back and began putting sand in the sea. The squirrel was tired after some time. But it ignored its tiredness and continued the service without stopping. It thought, ‘till there is life in my body, I will serve Shriram’. While it was again taking sand towards the sea someone looked at it with a lot of love. Children can you tell me who this was? It was Shriram Himself. He saw the squirrel and picked it up in His hands. Shriram affectionately put the fingers of His right hand on the tiny squirrel’s head and said, “Even though you are small, you have served me very well. I am very happy”. Listening to Shriram’s words, the squirrel was filled with gratitude. At that time, the impression of Shriram’s fingers appeared on the squirrel’s back. Children, the marks that we see on the back of a squirrel is actually the impression of Shriram’s fingers. Shriram told the squirrel, “Whoever serves me like the way you have, will always have My blessings and will never have scarcity in their life”.