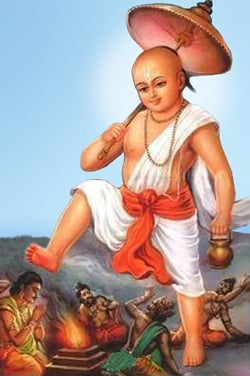 The Vamana Avatar starts with Mahabali the Asura King. Mahabali was the grandson of Prahlada and the son of Virochana.

After the churning of the ocean, the Gods became immortal and powerful. Indra’s army defeated Daityaraj Bali and his army of Asuras and Daityas.

One day Daityaraj Bali went to meet Rishi Shukracharya and asked him, “Acharya please show me a way to gain back all my powers and my kingdom.”

Hearing Bali’s words, Acharya replied, “You must perform the Mahabhishek Vishwajeet Yagya, to get back all your powers.”

Bali agreed to do the Yagya under the supervision of Shukracharya. After the yagya, Bali received a golden chariot pulled by four houses that ran at the speed of wind. He also got a quiver with numerous arrows, a flag post with lion’s head and celestial armour. Along with these things Shukracharya gave him a garland of ever blooming flowers and a conch shell whose battle cry was thunderous. Then, Bali went to battle against Indra. This time Daityaraj Bali won the battle and Indra fled from the battlefield. Bali once again asked for Shukracharya’s guidance to maintain his victorious position. Shukracharya said, “If you keep on performing yagyas, you can live a fearless and powerful life. You should also give alms to poor and the Brahmins.“

Bali readily agreed to do so. Meanwhile Indra approached Acharya Brihaspati to learn a way to gain back Gods’ powers. Acharya Brihaspati asked Indra to seek Lord Vishnu’s help. Now Indra started doing penance so as to please Lord Vishnu. Maharishi Kashyap’s wife Aditi, who was Indra’s mother, saw her son in trouble and went to Lord Vishnu for help. Lord Vishnu said, “I will help you, Devmata. I will be born as your son in the near future. I will and then kill Bali.”

And so it happened that Aditi gave birth to a boy. She named him Vamana. One day Vamana posed as a Brahmin and went to the spot where Shukracharya and Daityaraj Bali were performing a yagya. Bali welcomed the Brahmin boy and said, “How can I help you young Brahmin?”

The Brahmin said, “I have heard a lot about you give alms to Brahmins. I do not want wealth or luxuries; I just need the land that my three steps cover.”

All the people who were present there were surprised to hear the request of the Brahmin boy. The Asuras laughed at the boy’s request. Daityaraj Bali agreed to grant him what he wanted. Suddenly, to everyone’s surprise, the young Brahmin boy started growing in size. Soon he was larger than planet Earth itself. He took a large step and put it on Earth to claim it and said, “Now the earth is mine.” Then he took the second step and put it on Amravati which was under Bali’s control and said, “Now Amravati is mine.” Amravati was also under the Brahmin boy’s possession. Then he said, “Bali where should I keep my third step? Earth and Heaven are already mine. Now there is no place left.” Shukracharya warned Bali, “Be careful Bali! I am very sure this Brahmin is not an ordinary boy. He is surely Vamana, Lord Vishnu himself. Don’t let him take the third step or you will have to lose everything you have.” But Bali said, “Acharya, I have given him my word. I cannot go back from it. “The Asuras and Daityas heard this and stepped forward to attack Vamana, but they could not harm him at all.

Bali then addressed Vamana and said, “As nothing else is left you may keep your third step on my head.”

Hearing Bali’s words, Lord Vishnu appeared in his true form and said, “I bless you, Bali. From now on, you will rule Pataal Lok forever.”

Thus Bali went away to Pataal Lok. Indra and the other Gods retained Amravati due to Lord Vishnu’s Vamana Avtar.