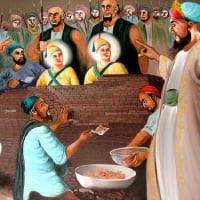 Wazir Khan threatened both the boys with death if they did not convert and accept Islam. Children, imagine if someone threatens us like this we would be scared, isn’t it? But both of them were not afraid. Hearing this from Wazir Khan, these two lion cubs said, ‘We will die, but we will not give up our religion! Our religion is dearer to us than our life. Our grandfather Guru Tegh Bahadurji had sacrificed his life to uphold Dharma. He is our role model’. The Subedar got very angry when he heard these words. He killed both the brothers Zorawar Singh and Fateh Singh by entombing them live in the wall. Even at such a young age there was so much love for Dharma in both of them. Dear children, there is no parallel example from any country anywhere in the world, where children who were just 8 and 5 years of age sacrificed their life willingly for the sake of religion!

Children, we are also born in such a great Hindu Dharma. We should love this Dharma more than our lives. Only if we love our Dharma, will we be able to willingly sacrifice for Dharma.