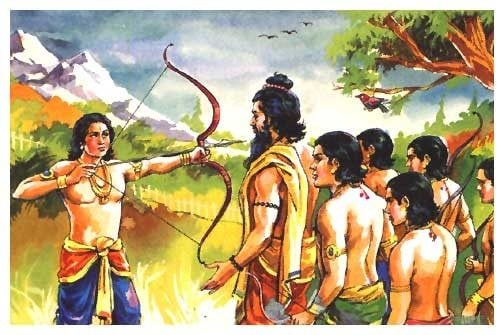 This a story from the Mahabharat era. As you all know Dronacharya was the Guru for the Kauravas and Pandavas. Dronacharya taught them archery. His disciples were gradually gaining proficiency. Dronacharya thought “I am teaching all of them but I have to find out how much skill they have imbibed”. So in order to test their skills, he made a bird out of clay and tied it to a tree branch.

He called all his disciples. He said to them,“I have tied a bird to the tree. You have to shoot the bird’s eye”. He first called Yudhishthira to take the test. He was the eldest among Kauravas and Pandavas. Dronacharya said, “Yudhishthira, mount the arrow on the bow, focus on the bird and aim”.

Arjuna replied, “Gurudev, I can see only the bird’s eye”. All the disciples laughed at Arjuna’s  answer. But children do you know what happened. Deep within Dronacharya was pleased with Arjuna’s answer. He paused and repeated his question “Arjuna, alright now, look properly. What do you see?”

Arjuna answered, “Gurudev, all I can see is the bird’s eye and nothing else”. Pleased with this answer Dronacharya said, “Child, shoot the arrow”. Arjuna pierced the bird’s eye with his arrow. Dronacharya patted Arjuna’s back and appreciated him. And said “Arjuna, you have passed the test. You will become the best archer of the era”.

So children, what do we learn from this story?. We have learnt like Arjuna our attention should be on the goal, then only will we be successful. So we should also focus our attention on the goal.