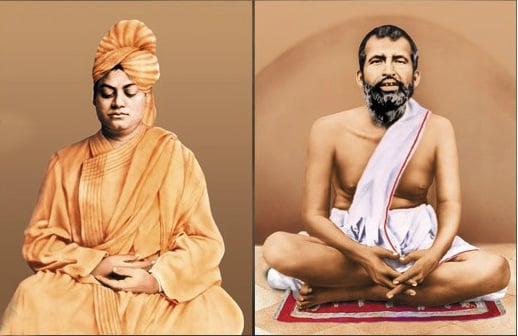 Swami Vivekananda asked for only spiritual knowledge, devotion and detachment from worldy pleasures from the Goddess Jagadamba. While explaining how this could happen, Swami Vivekananda says, “There were thousands of worldly thoughts in my mind. I left my home in search of some job in order to earn some money. I earned some money by working at an attorney’s office and by translating some books and pulled on somehow, but I could not succeed in getting a permanent job. Thus, I failed to make permanent arrangement of provisions for my mother and brothers. One day, a thought came across my mind. I thought, God listens to Thakur (Ramkrushna Paramhans), so I would ask Him to pray for relieving my mother and brothers of their hardships. He will never refuse my request.’ Thinking so I reached Dakshineshwar and told Thakur repeatedly, ‘You should pray to Jaganmata for relieving my mother and brothers of their financial problems.’ However, Thakur said, ‘I cannot ask my Mother (Jaganmata) for such things. Why do you not yourself tell the Mother about it? You suffer because you have no faith in Mother.’ However, I refused to budge and said ‘I do not know Mother; you tell her. You must tell her. I shall not leave unless you do so.’ Thakur smiled and said lovingly, ‘I tell her so many times to relieve you of your hardships; but since you do not believe in Her power, she does not listen to those prayers. You do one thing. Today is Tuesday. Go to Kalimata’s temple tonight and pay obeisance to Her and She will give you whatever you ask for. My Mother is Divine Energy. She has given birth to the Universe. What is impossible for Her if she desires?”

Swami Vivekananda further narrates, “After listening to those words of Thakur, I became sure that all my problems would definitely get solved once I pray to the Goddess. I was eagerly waiting for the night to come. After waiting for three hours [(one prahar) – There are in all 8 prahars in a day, Thakur told me to go to the temple of Kalimata. As I was entering the temple, I experienced a kind of trance; my feet started to tremble. The strong belief in my mind that I would be able to see the Mother and hear her voice made me forget the materialistic world. All worldly thoughts vanished from my mind and the only thoughts in my mind were of the Mother. After entering the temple, I saw that the Mother was really Divine, alive and the source of love and beauty. My heart was full with devotion and love. I repeatedly paid obeisance to her and said, ‘O Mother, grant me the boon of discriminating between right and wrong (Vivek), detachment, spiritual knowledge, devotion and see to it that I always get Your vision without any hindrance.’ My heart was at peace. The whole world disappeared and only the Mother occupied my heart.

When I returned to Thakur, He asked, ‘Narendra, did you pray to the Mother to fulfil all your wishes?’ I was surprised and I said, ‘No Maharaj, I forgot to ask. What shall I do now?’ He said, ‘Go, again and pray to Her.’ So, I went into the temple and again I was in similar trance and forgetting everything I paid my obeisance to her repeatedly and asked for knowledge and devotion and returned back. Thakur asked me, ‘Did you tell Her now at least?’ Again I was surprised and I said, ‘No Master, I get spellbound due to Her Divine Energy when I stand before Her. I forget everything and only ask for knowledge and devotion. What will happen now?’ Thakur smiled and said, ‘Ok boy, you could not even tell Her such a simple thing. If possible go quickly and tell Her everything you wish.’ Again I entered the temple and I was greatly ashamed. I started thinking, ‘What an ordinary thing I have come to ask for! ‘ This is just like what Thakur says, ‘When the king is pleased with you, it is senseless to ask for a gourd.’ Is my intellect so deteriorated, that I have come to ask for such an ordinary thing? Repeatedly praying to the Mother, I said, ‘Just give me knowledge and devotion and nothing else.’ A thought came into my mind when I came out from the temple that all that had happened is Thakur’s Divine Play. Otherwise, having gone to the Mother thrice how could I not ask for anything from Her. Thereafter I told Thakur, ‘I know that it was you who made me forget everything. So now, you only promise me that my mother and brothers will have enough food and clothing forever.’ He said, ‘I could never pray like this for anyone before. I cannot utter such prayers. I told you whatever you asked for the Mother, you would get it. You could not ask. What can I do if you are not destined to have worldly satisfaction?’ I said, ‘Maharaj I am absolutely sure that if you say then my mother and brothers will not suffer in their life.’ When I told Him persistently, He said, ‘Ok go, they will not have any problem in getting simple food and clothing henceforth.”

Moral : From this story of Swami Vivekananda, we can see that, a seeker with pure intellect will ask for spiritual rather than worldly things. He will ask for things useful for social welfare. There will be no selfish motive in it. Hence, fulfilling such seeker’s wish will only benefit the Universe.