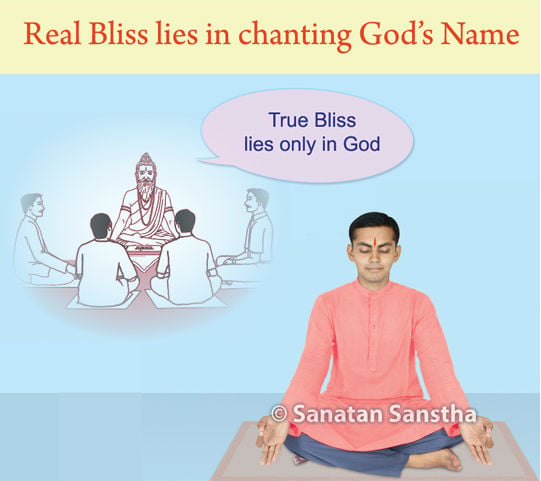 Once, an ascetic who was on a pilgrimage came to a village. Just on the outskirts of the village, there was a temple of Deity Maruti. He decided to stay in that temple. As  a few days passed, the villagers gradually got familiar with the ascetic and often used to come to meet him. Over a period of time, the villagers developed closeness with the ascetic. The villagers used to tell him their worldly problems and ask him queries about spirituality. The ascetic used to patiently listen to their problems and clear their doubts about spirituality. Sometimes, he also used to conduct spiritual discourses for the villagers.

Once, during a discourse, the ascetic told the villagers, “O my dear people, remember, one cannot be totally happy by the enjoyment of the five senses. Hence, one should accept every situation in life, be satisfied with whatever one has and concentrate his mind towards chanting God’s Name. He should serve God selflessly. True Bliss lies only in God.”

On hearing this, an elderly villager got up and said angrily, “It is very easy to give such advice. It is very easy to say that one should not go after the five senses. But practically, it is not possible. Look at my situation. My youngest son is 12 years old, but I have still not performed his thread ceremony.  My other son is 18 years old, but he has not yet completed his education. My eldest daughter is 20 years old, but I am still unable to find a suitable groom for her. Because of all this, my wife has developed immense mental stress. She has to take medicines to reduce her stress. My salary is not enough to take care of all these needs of my family. In such a situation how can you expect me not to worry?”

After hearing the plight of the man, the ascetic smiled and said, “Are your problems solved by worrying? You have been worrying for various reasons all these years. However, how many of these problems were solved by worrying? Although we are aware of this fact, we do not stop worrying; do we? Instead of worrying, if we are satisfied with whatever we have and divert our mind towards the chanting of God’s Name, we are sure to find a way to come out of all these worries. As God is very powerful, everything is possible for Him. Hence, you should spend maximum time in the chanting of God’s name.”

On hearing this, the man realised his mistake and bowed down in respect before the ascetic.

Children, it is necessary to be satisfied with whatever we have and concentrate on chanting God’s Name instead of worrying about every little thing. As you saw in the story, no problem can be solved by worrying. Hence, utilize your maximum time in the chanting of  God’s name.