If you tell your child one story a day, by the time he is fourteen or so you would have told him five thousand stories. What we see on television or in the theatre is a story. However, 99% of our films are such that it will not be surprising at all if children watching these start using the choicest of abuses or indulge in violence. 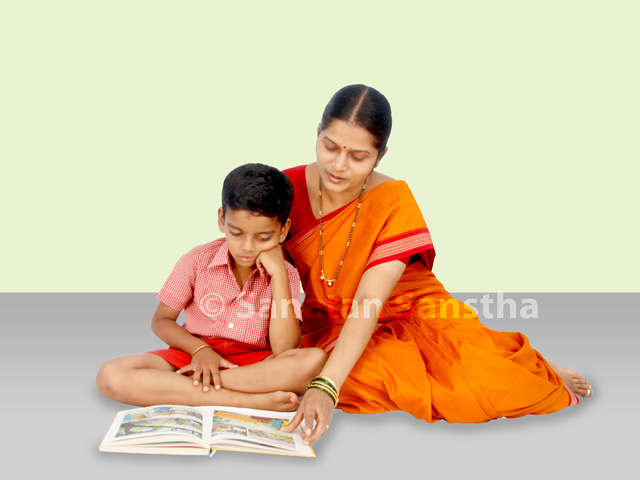 The question is not whether watching television is good or bad. It is the duty of every parent to monitor which television programs their child should watch. A programs prohibited for the child is also prohibited for you. You can watch it after the child is asleep. You should decide which stories you will narrate to your child. You may select, alter or delete part of a story.

The first story told to the child in every family in Maharashtra is about a crow and a sparrow, which is given ahead.

A crow and a sparrow were neighbours. The crow’s house was made of cow dung and the sparrow’s was made of wax. One day it started raining heavily. The crow’s house got washed away. The crow got drenched and started shivering. He knocked on the sparrow’s door, requesting it to open the door, upon which she replied, “Please wait, I am bathing my child.” When he knocked again after some time she said, “Wait, I am dressing up my child”. After sometime he knocked again only to get an answer that she was applying kajal to the child. The sparrow was unwilling to open the door. The crow was waiting outside the sparrow’s door shivering in the rain. He was hungry too. Finally, he pushed open her door. Nice khichdi was on the stove. He ate the khichdi. This enraged the sparrow and she hurled burning coals at the crow’s tail from the stove. The crow’s tail caught fire and it flew away. The sparrow was happy and started singing, “The crow’s tail got burnt. It serves him right. Shame on him”. This is the end of the story.

It is indeed difficult to discover a story as useless as this one. It teaches the opposite of ‘love thy neighbour‘. Now, let us see how we can alter this story. When the crow banged on the sparrow’s door, she left all her chores and opened the door to welcome the crow. She gave the crow a change of clothes and khichdi. She told the crow not to worry at all and that he could live there as if it were his home. She also assured the crow that after the rain stopped, they would rebuild the crow’s house together. In the summer, the sparrow’s wax house melted. She approached the crow, which welcomed her and allowed her to live in his house for four months.

When a child is told such type of story, the impression about how to behave with neighbours is imprinted on its mind.