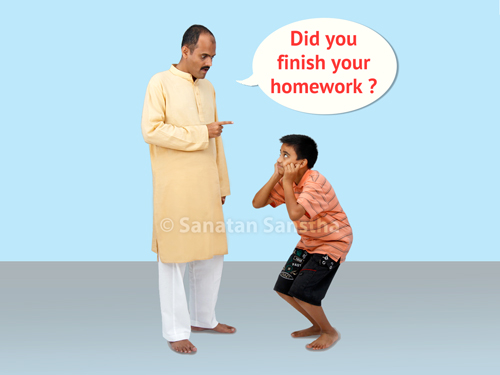 The verb to discipline means to educate, to train and to bring under control. Discipline is defined as training in proper conduct and action. It is mental and moral training. Discipline begins at one and half to two years so that the child learns to follow the rules, regulations and fulfills the expectations of the members of his family. The aim of discipline is to provide the child with incentives, reasons, values and ideals so that he becomes a self-disciplined person, capable of exercising his own judgement and choosing his way of behaviour in the best possible manner.

Children like to imitate. They observe their parents from the day they are born. That is why many children have exactly the same style of walking, speaking and behaving as their parents. Hence, parents should be very careful about their actions and speech and correct them if they are faulty.

1. How should parents inculcate discipline in a child ?

The child learns better by praise and rewards rather than by punishment. Admire and appreciate the good qualities and actions of the child which would encourage him to pursue them further. Express disapproval of his undisciplined behaviour so that they would come to know what is discipline.

Children are, after all, children. They enjoy spilling water on the floor and splashing it, playing with mud, tearing paper etc. One cannot expect their shirt to remain clean for the whole day. Rather than punishing a child for spoiling his shirt while playing, it is better to offer him another shirt. This will automatically impress the importance of cleanliness on the child’s mind.

The child may make the room messy by scattering his toys or marbles all around the room. However, if he is disciplined to keep the toys in the bag after his play or books on shelves after his reading is over, you should be happy.

Children cannot remain quiet in a place. Throughout the day, they enjoy running, jumping, climbing etc. However, if the child starts jumping on the chair, it is better to tell him that chairs are meant for sitting and not for jumping. This comment should be passed without scolding but showing disapproval at the same time.

Consistency is important for teaching discipline for example when a three year old child climbs up the window by catching the bars, the father may encourage, while the mother may scold him for the same act. The members of the family should not scold one another or pass adverse comments for punishing the child.

The punishment should be proportional to the undesired act and behaviour and executed immediately after the act. Do not threaten the child, “Let the father come in the evening”. After the punishment is over, the incident should be forgotten and the child’s attention diverted to some other topic.

2. What are the methods of disciplining the child when he misbehaves ?

B. Reasoning, reviewing and correcting the mistake : Reasoning, reviewing and correcting the mistake and rehearsing the correct behaviour should be attempted. If the child tears paper and throws its pieces all over ask him to pick up the pieces and prevent him from playing till he has done so. Reasoning and physical punishment are more effective than physical punishment alone.

C. Modelling : The example of parents that is their behaviour and reactions in various circumstances influences the child.

When the child misbehaves, the punishment should vary with the degree of the misbehaviour and the age of the child. Some simple punishments are :

3. Should physical punishment be imposed for disciplining a child ?

It is important to remember that the aim of punishment is not to give vent to one’s anger on the child and make him suffer physically. Ideally, the need for physical punishment should rarely arise. The intelligent child can easily sense the disapproval of his loving parents and behave himself as he does not want to be in the bad books of his parents. It is the parent’s disapproval and not the smack that hurts. On the other hand, when a child is beaten or caned for every minor mistake, the punishment ceases to have its desired effect.

Some children might exceed the limit and do certain things beyond one’s tolerance. Any behaviour, that endangers the health and welfare of the family, causes financial loss or goes against laws and social acceptability for example stealing should be curtailed strictly. If after a stern warning, the child repeats the same forbidden act, he deserves physical punishment at the first instance, making him realise what is discipline and such things will not be tolerated any more. It has been rightly stated in the Old Testament, “He who spares the rod, hates his son, but he who loves him is diligent to discipline him.”

4. What mistakes are committed while inculcating discipline in a child ?

The common mistakes are :