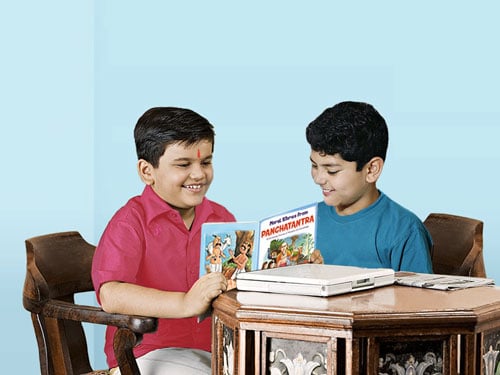 1. What is the influence of friends on children ?

There is the story of a foolish fruit seller who found one rotten apple in a basket containing two dozen good apples; He thought that the rotten apple on finding itself in such good company will surely improve. He packed the apple back into the basket with the rest and left it aside for a week. When he opened it a week later, he was surprised to find that all the apples had gone bad.

Children too are like these apples. If only one or two children are bad, the whole group can get spoil. It is very important to supervise a child’s choice of friends and companions because sooner or later he will start behaving like them, pick up bad manners, utter bad words or develop bad habits like telling lies, picking money from parents’ purse and missing classes. Children who are too playful, may pull out a studious child from his books by calling him a book-worm and making fun of him. Children pick up bad behavior under influence of friends because of following reasons :

You can always judge a child or a man even by the character of his friends as birds of the same feather flock together. Hence, you must know who child’s friends and companions are. He must be encouraged to bring them home to meet you at least a few times so that you can know what kind of children they are. If they are not suitable, the child must not be allowed to consort with them.

2. How do neighbours modify the personality of the child ?

Neighbours contribute a lot to the development of a child’s personality. Good neighbours induce positive feelings of love, respect and affection. Quarrelsome neighbours set an example of discord, non co-operation and ill feeling. The child learns to bear ill will to them and their children. He learns to gossip and find fault. Even if parents have not bought a T.V. so that their child’s mind is not distracted, they may find him in neighbour’s house all the while seeing video films which may be for adults only. Thus a child’s personality may be made or marred by his neighbours.