The characteristics of child development between 1 to 12 years of age and the important factors which modify them are illustrated here. This article also explains care to be taken by the parents, guidelines on parents’ duties and the common problems faced while the child is growing. 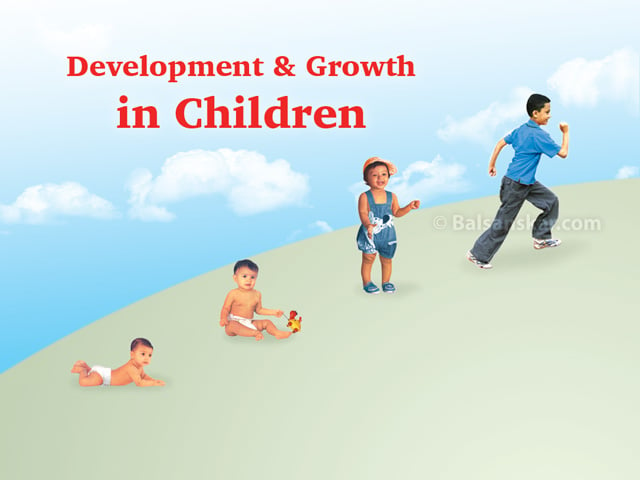 1. What are the important phases of development between 1 and 12 years ?

This is a period of slow and steady child development and growth. It is preceded by a phase of rapid growth of infancy and is followed by the second growth spurt of adolescence. This period is divided into

2. What are the characteristics of child development and growth during the second year ?

The rate of child development and growth slows down during the second year. On an average the child puts on only 2 kg. of weight and 10 cms, of height per year. The appetite also decreases simultaneously. Because of less food intake and excessive activity, the child starts losing his pads of fat. The plump infant gradually becomes lean. The tummy appears prominent as the spine develops a forward curvature. During this period, additional 8 to 10 milk teeth erupt. The second molars usually erupt between 20 and 30 months of age. One should not worry about slight delay in the eruption of teeth compared with other children of the same age.

Between 18 and 24 months most children can express their toilet needs. During the second year, the child enjoys imitating others. However, he does not play with other children. He enjoys solitary play and exploration of the objects in the surroundings. The child sleeps for 9 to 10 hours at night and for 1 to 3 hours in the afternoon.

3. What problems are commonly seen during the second year ?

During this period as the child is learning to walk and run, he falls frequently. The child starts climbing on furniture and may reach unsafe places. Hence constant surveillance is needed. The child explores the objects in the surroundings. He empties waste baskets, drawers and may swallow medicine, tablets or poisonous substances. Hence household poisons, drugs and other chemicals should be kept under lock and key and should not be accessible to the child.

The anxious and tense mother’s vigorous attempts at toilet training often make the child tense and lead to soiling of nappies by stools.

Disciplining the child begins at about one and a half years as one has to restrain the child from reaching dangerous heights like gallery, railing or dangerous sites such as gas, electric points. This often leads to frustration and anger which manifest as temper-tantrums or breath-holding spasms in some children.

4. What are the characteristics and problems of a preschool child ?

The child between two and five years is called as a preschool child. During this period, the child puts on one and a half to two kgs. of weight and 6 to 7 cms. of height every year. The child appears thin and lean. The prominent tummy tends to disappear by 4 years. The child can ascend a stair by alternation of his feet by 3 years and descend in the same manner by 4 years. By 3 years, the child can stand on one leg for a short time and by 5 years, he can hop on one foot. By the end of 3, 4, 5 and 6 years he can copy a circle, a square, a triangle and a diamond respectively.

Due to competition, feelings of jealousy and rivalry make their appearance in the child’s mind. Right from third year onwards children enjoy listening to short stories from Ramayan, Mahabharat, Panchatantra and life histories of Shivaji, Saint Dnyaneshwar, Abraham Lincoln etc. During this period, children become aware of their sex.

This is also the age for asking questions. An inquisitive child would like to know how a fan starts moving when one puts the switch on etc. The parents should not get upset by such questions. They should answer them in as simple and lucid language as possible.

During this stage the conscience develops and incorporates various do’s and dont’s. Till the end of two years, the child can inhibit the forbidden activities, impulses or urges only when mother, father or some other person disapproves and forbids him from completing the act by saying ‘no’ or carrying him away. With the inner voice of conscience, the child remembers the do’s and dont’s dictated by parents even when he is alone. This leads to the development of guilt complex or anxiety, whenever he acts against his conscience.

Anxiety is expressed as fear or nightmare of darkness, animals, bodily injury, separation from parents or death of a dear one. Irrational fears are common till the age of five years. Some children may develop behaviour problems like thumb-sucking, stammering and nail-biting.

5. What habits should be ingrained in a pre-school child ?

Between two and five years, the child should be trained for :

6. What are the peculiarities of early school years ?

The early school years comprise a period from sixth year to preadolescent growth spurt, which occurs by about ten years in girls and about 12 years in boys. During this period the child puts on about 2 to 2.5 kgs. of weight and 5 cms, of height every year.

The spine becomes straight. The body is quite flexible so that the child can easily assume various postures in yogic asanas (Posture) that is exercises which adults find difficult to perform. The child enjoys outdoor games and other activities involving muscular skills.

The first permanent teeth to appear are the first molars. They appear during seventh year. The tonsils appear big, as the lymphoid tissue is at the peak of its development. Big tonsils are no indication for their removal as tonsils act as body guards and prevent respiratory infections, which are common during this period.

The child spends 6 to 8 hours in his school and automatically learns to live independently away from his home. During this period, the child develops a sense of duty and accepts responsibilities. Now the child’s time and energy are diverted to learning and developing friendship with classmates and neighbour’s children.

Logical thinking develops after 7 years of age. He begins to compare his parent’s ideas with those of other people and with his own independent opinions. Now the child can draw logical conclusions about the events he is observing, but abstract thinking using thoughts alone develops after 12 years.

Faulty postures, caries of teeth, defective eye sight and recurrent attacks of cold and cough are common problems in these children.

Learning difficulties like inability to distinguish between letters and fear of school are common problems. Anti-social problems like stealing, truancy that is running away from school and wandering with friends are seen in this age group. Hence the parents should see that the child gets interested in his school and studies.

A. Few important mile-stones attained by children of this age group

6th year – The child cannot sit quietly at one place. He is all the time on his feet. He enjoys running, jumping, and group plays. His vocabulary is about 2500 words. He quarrels and fights with his friends for minor reasons. However, he forgets his enmity soon and becomes friend with him again within a short time.

7th and 8th year – He likes to imitate and dress like his friends. He becomes aware and enjoys discussion on different subjects. He has learned to note the time by seeing the watch. He can do simple additions and subtractions. He can convey simple messages. He enjoys picnics and outings.

9th year – The child enjoys outdoor games, playing with marbles, cycling and swimming. He selects his friends. He is aware of the day, month and year. He enjoys reading comics and short stories and listening to radio. He may spend hours together watching television. He enjoys jokes, playing mischief and making fun of others.

10th year – He can use instruments like scissors, hammer carefully. He dresses neatly and can comb his hair well. Girls are more careful about their dress and hair style. Boys and girls do not mix but form their own separate groups. They become well versed in multiplications and divisions. Girls take interest in household activities and help mother in kitchen.

11th and 12th years – The child thinks logically and can discuss in a systematic way. He becomes well versed with fractions and decimals. The girls may get their first menstrual period and become conscious of the gradual changes in their physique. They can finish reading a novel at a stretch.