This article would help educate parents on some of the beneficial baby customs and traditions such as keeping the newborn with the mother right from the beginning, administrating gold to the newborn along with other Ayurvedic medicines and performing naming ceremony on twelfth day, however avoiding celebration to prevent the newborn baby from catching any infections.

Traditions are initially set after carefully studying, observing and trying that a particular custom, process, ritual or action is beneficial to the society.

For some people fish eating is prohibited in the month of Shravan. This tradition in ancient time was probably the result of :

With the advance in scientific knowledge, some traditions become obsolete in course of time. About 50 years ago children’s specialists used to insist on regular clockwise three or four hourly feeds for infants, which became a tradition. At present children’s specialists have realised that demand feeding is logical. Thus, traditions are initially set up by wise people or leaders of the community and are then carried on from generation to generation.

B. Classification of traditions :

Traditions may be classified as follows :

One should encourage and follow beneficial traditions. Harmful traditions should be discouraged and discontinued. Traditions which are neither beneficial nor harmful could be followed as one may not be able to explain their basis or beneficial effects with the help of existing scientific knowledge.

2. Should the newborn baby be kept with the mother right from the beginning while in the maternity home ?

Top feeds are given in nurseries and this often acts as the starting point of diarrhoea. Protection of the health of a baby is more important than the comfort of the mother. If a mother is looking after the baby, she can easily breast-feed the baby and the incidence of diarrhoea and other infections is automatically kept to minimum. In case the breast-fed baby requires hospitalisation, the mother also must be admitted along with the baby so that breast feeding is not discontinued. In a nursery there are many babies who are wrapped up well and the napkins have to be changed immediately after the passage of urine and stools. It would be better if the mother looks after the baby with the assistance of a nurse rather than leaving the baby with the nurse or in a nursery.

3. Why is gold administered traditionally to young infants ?

According to Ayurveda, gold is a tonic for the nervous system and increases intellect and memory. It also increases lustre of the skin and tones up other tissues. Pure gold is rubbed on a grinding stone with honey and ghee and is given for licking. Pure gold is often given with Brahmi, Vacha, Anant and Shankhapushpi which are Ayurvedic brain tonics.

Growth and development of the brain are rapid in infancy and hence all the traditional tonics for infants include brain tonics and are given routinely for a period of 6 months to 1 year. It is worthwhile undertaking experiments to study the efficacy of gold as a brain tonic.

4. Should the baby’s naming ceremony be performed on the twelfth day of its birth ? 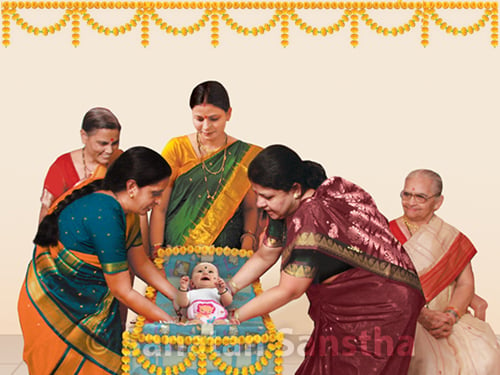 Traditionally, it has been a practice to name the baby on the twelfth day in Maharashtra and probably within a few weeks all over India. This ceremony can be held on the stipulated day in accordance with the religious and traditional practice but its celebration should be postponed till the child becomes at least six months old.

When the baby is named earlier, it starts gradually identifying itself with the particular name. Indirectly this helps in developing the personality of the child. The advantage in postponing the celebration of this ceremony till six months of age clearly avoids exposure of the newborn baby to many guests and relatives, who attend the function, fondle and kiss the baby. It is most likely that at least one of them might be suffering from some minor infection like cold, cough, skin infection etc. which are infectious. The newborn baby can easily pick up one of them. The general resistance of any newborn baby being poor, the same minor infection can turn out to be a serious infection.

Hence it is advisable to stick to the baby customs and conduct the religious and traditional rites of naming ceremony on the twelfth day and celebrate the occasion subsequently when the child grows up.