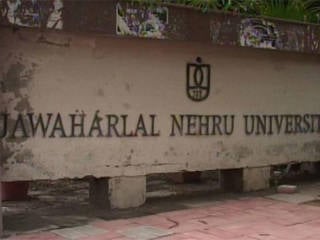 New Delhi : Amidst protests against “anti-national activities” in the Delhi University, a poster calling for azadi for Kashmir sprang up on the Jawaharlal Nehru University campus on Thursday.

Some students noticed the poster on the wall of the School of Social Sciences’ new block and apprised the university’s administration of the same.

The JNU administration then asked the university security to remove the poster in the evening.

“The university has already lost precious time and energy in such unnecessary controversies. Unfortunately, a small group of people are still trying to create another ruckus and vitiate the academic environment.”

“We don’t know who put up the poster as this has been the pattern in JNU. However, the administration has asked the staff to bring it down,” a senior university official said.

The administration was unable to function for over 17 days due to the blockade of the administrative building by students in protest against changes in the admission policy and it was only early this week that the staff got access to the building and resumed work.

DSU’s former members Umar Khalid, Anirban Bhattacharya and others had organised the controversial event last year against the hanging of Parliament attack convict Afzal Guru at the JNU during which anti-national slogans were allegedly raised.

Khalid, Bhattacharya and former student union president Kanhaiya Kumar are out on bail in a sedition case over the event.

Meanwhile, President Pranab Mukherjee on Thursday said there should be “no room in India for the intolerant Indian”. He also asked students to refrain from “propagating the culture of unrest”.