Now Sadhvi Pragyaji is acquitted from this case. In many cases, even chargesheet have not been filed. She is suffering from cancer and various diseases. Still she is not getting bail, while many others on murder and terrorism charges are roaming freely on bail. Why this bias with Sadhvi Pragya ? Is it because she is Hindu ? – Editor, Hindujagruti 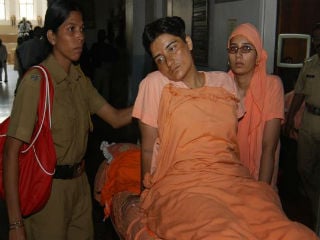 Sadhvi Pragya Singh Thakur was today acquitted along with seven others by a local court in the murder case of RSS parcharak Sunil Joshi for lack of evidence.

Initially, the probe had hit a dead-end, but later arrest of a person in Rajasthan led the district police to name Sadhvi Pragya and others as accused in the case.

Joshi was once a close aide of Sadhvi Pragya, but they fell out later.

Sadhvi Pragya is in judicial custody in connection with terror cases. She was not present in the court here when the verdict was announced.

Hearing the not guilty verdict, Anandraj and Vasudev, who were present in the court along with relatives and supporters, broke down.