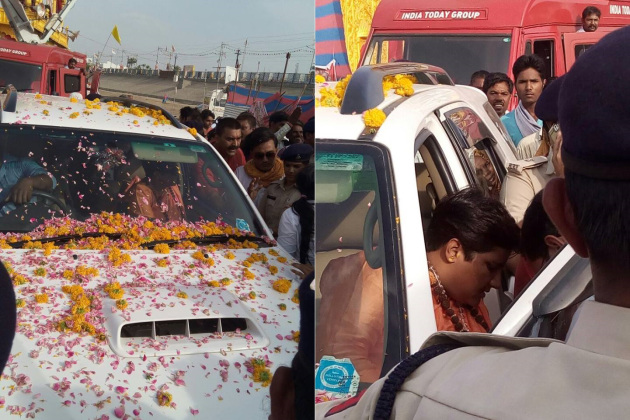 Ujjain : Smashing the fake Congressi charge of “Saffron Terrorisms”, 2008 Malegaon blast case accused Sadhvi Pragya Singh Thakur, who was on a fast-unto-death for not being allowed to take a holy dip during the ongoing Simhastha Kumbh at Ujjain, is expected to offer prayer at Mahakaleshawr Temple on Thursday after a ‘snan’ in the Kshipra river.

Amid a tight security Sadhvi reached Ujjain on Wednesday night around 9 am.

Sadhvi Pragya Singh Thakur, who last week got a clean chit in the 2008 Malegaon blast case, today broke her two-day-long hunger strike by drinking a glass of fruit juice offered by a child at Vande Mataram Ashram of Vishwa Hindu Parishad here.

She called off her fast as the authorities made the arrangements for her to visit the ongoing Kumbh Mela here.

After taking holi dip (snan) in river Kshipra, Sadhvi will also meet her Gurudeva Avdeshanandaji Giri of Juna Akhada and will break her fasting as per special input.

Pragya, who is undergoing treatment at Bhopal’s Pandit Khushilal Sharma Government Ayurveda College and Institute began her fast on Monday for not being allowed to attend Kumbh mela in Ujjain despite a court order.

Sadhvi Pragya, who was given a clean chit by the NIA in the Malegaon blast case, had earlier threatened to begin a fast unto death if not allowed to take a holy dip in the river Kshipra.

He had pointed out in the letter that when the trial court had accepted her application seeking permission to take a dip in the river, then why was she not being allowed by the state government.

Sadhvi Pragya has in the letter said she is suffering from cancer, adding it is her last wish to visit the Kumbh as she may not be able to do so in the future.

Her close aide Bhagwan Jha carried the letter to the Jail Superintendent, who assured him to raise this issue with senior officials.

She had issued an ultimatum to the government till May 21.

MP CM Shivraj Singh Chouhan was also put in pressure by active social media and finaaly made and sutable arrangement for Sadhvi Pragya for her vist to Simhath parv showing his ‘Hindu standard’, not a ‘double standard’.

In a short interaction with the media, Sadhvi Pragya Singh Thakur attacked Congress Party by saying, “the grand old party had framed her to raise ‘saffron terror’ bogey”.

Thakur said, “Congress has started ‘saffron terror’ with me because they were scared of me”.