Allow Sadhvi Pragya for Kumbh Snan. This holy dip in Simhasth is essential for her ailing condition 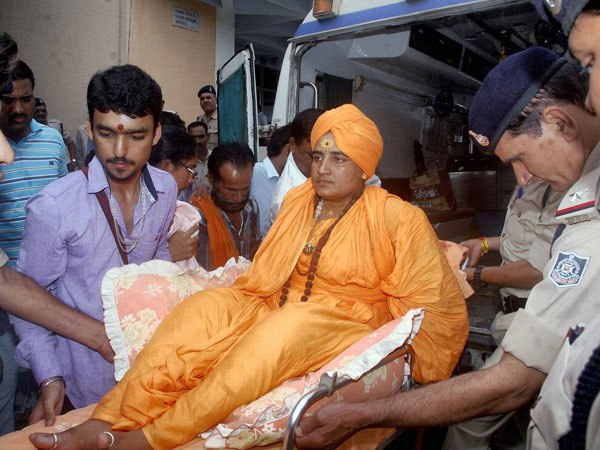 Designated court had allowed Sadhvi to visit the religious fair and take the dip on May 4; but why the BJP Govt. in MP is not making adequate arrangements for Sadhvi’s visit to Simhasth?

Bhopal : Sadhvi Pragya Singh Thakur, against whom the NIA recently dropped charges in the 2008 Malegaon blast case, on 16th May 2016 launched a hunger strike in a hospital here for not being allowed to visit Kumbh fair in Ujjain despite a court order in her favour.

Sadhvi, who wanted to take a dip in Shipra river and had secured an order from a court in Dewas district, started the protest at around 9 AM in Pandit Khushilal Sharma Ayurvedic Hospital where she is undergoing treatment by refusing to take food and water.

“Upset over not being allowed to visit Simhastha mela and take holy dip in Shipra river, the Sadhvi has started protest in the Pandit Khushilal Sharma Ayurvedic Hospital by leaving water and food since 9 AM” her close associate Bhagwan Jha told reporters.

Jha said the court had allowed Sadhvi to visit the religious fair and take the dip on May 4.

He claimed despite the court order, the police were not letting Sadhvi visit Ujjain under the pretext of not having adequate personnel.

Jha further claimed Sadhvi has threatened to take her life if she was not allowed to visit Kumbh mela by May 21, the last day of the month-long event.

Sadhvi had recently written a letter to the Madhya Pradesh government in this regard.

Police and prison department officials refused to comment on the issue. The authorities at the hospital also could not be contacted.

The NIA had on Friday dropped all charges against Sadhvi and five others in the Malegaon blast case while charges under the stringent MCOCA law were given up against all the other 10 accused, including Lt Col Prasad Shrikant Purohit.

Seven people were killed in the blast in Malegaon when they were coming out after prayers during Ramzan on September 29, 2008.