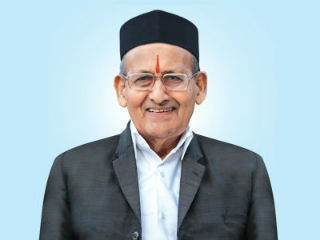 Shri. Shripad Naik, Central Minister of State for Culture and Tourism (independent charge) has declared that recitation of ‘shloka’ was not compulsory; making appeal to Muslims to chant ‘Allah’s name while participating in ‘International Yoga Day’. Given below are views expressed by Param Pujya (H. H.) Pande Maharaj in this context.

‘Fanatics from India have opposed to saying ‘Om’ and practicing ‘Surya-namaskar’ although these things are part of Yoga. The Central Ministry removed ‘Om’ and ‘Surya-namaskar’ from ‘Yoga’, kowtowing to fanatics. So, the fanatics have realized that if they glowered a little, the Government bows before them. They will now find some more excuse on 21st June to oppose ‘International Yoga Day’. The Central Government needs to take a view in this regard and decide that how far it is going to bow down before fanatics for their appeasement! On 21st  June, the ‘international Yoga Day’ has to be celebrated as planned all over the world; but in India the position seems to be totally different.

The Government is behaving in this manner despite absolute majority. Tomorrow, if fanatics keep some more proposals before the Government and those are not approved, they seem to be planning to stage riots all over the country on 21st June; they will loot people and cause terror. The Government should be alert and maintain proper security.

It may be mentioned that the Minister of Yoga and Traditional Medicines, Shripad Naik has made an appeal that Muslims may say ‘Allah’ instead of reciting shlokas; so the Government is only making mockery of ‘Yoga Day’ and feel like warning the Government to be – ‘Beware ! Beware ! Be alert ! Be alert ! Outcome of over-pampering can be quite dangerous.’