Hindus are wondering that whether Parrikar is trying to become a dictator by making such statements ! Also what about forceful conversion of Hindus by missionaries and brutal Goan Inquisition by ruthless Francis Xavier ? Parrikar should also note that if anyone wants to reconvert to Hinduism on his own will, Parrikar can’t stop him as per freedom of religion guaranteed by Constitution ! – Editor, HJS 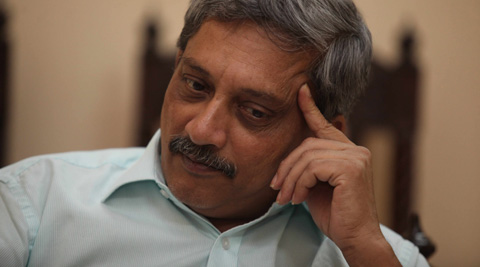 Panjim : Defence Minister Manohar Parrikar on Monday assured the Christian community that the controversial ‘Ghar Wapsi’ programme of religious re-conversion would not be allowed to touch Goa.

He was interacting with a delegation of members from Goan Catholic Welfare Union (GCWU), who met Parrikar to voice concern over the recent burning of a Delhi church, as well as attacks on protesters by the Delhi police.

The delegation, which included Goa Football Development Council (GFDC) Chairman Dr Rufino Monteiro, submitted a memorandum and said there are apprehensions and fears among Goan Catholics that such attacks on churches could occur in Goa.

The delegation, comprising priests, nuns and lay persons, requested Parrikar that an assurance for the safety, security and protection of churches and Christian minorities is the need of the hour.

“The delegation also raised the issue of ‘Ghar Wapsi’ as this concept could spread its tentacles in Goa and the under privileged section of Christian community could become innocent victims of inducements for reverse conversion,” stated a GCWU press note. “Parrikar said that he will take up the Delhi church issue with the Union Home Minister and with respect to ‘Ghar Wapsi’, he assured it could never touch Goa.”

“He went on the say that it is he who had stopped Pramod Muthalik from joining the BJP and that the Ram Sene leader is relaxing untouched in Congress ruled Karnataka state,” the press note added.

Sr Escaline Miranda (ICM) told Parrikar that even nuns were not spared by the Delhi police and were dragged and pushed inside the buses. Describing the action as nothing short of police brutalities, she said action must be taken against the Delhi police for such inhuman treatment.

Parrikar rebutted saying that police take orders from the election commission as the Delhi election was underway and no protest or demonstration within 48 hours of the poll is permissible.

He assured to take up the matter with B S Bassi, who was earlier DGP in Goa, and now Delhi Police Commissioner.

The delegation also raised the issue that BJP had failed in its promise to establish a Minority Commission which it promised in its manifesto before the 2012 state elections.

The GCWU claimed that it was three years that the bill was passed in the assembly and had been referred to a select committee, which is kept in cold storage.

Parrikar agreed to take up the issue on a war footing with the State Government and ensure the setting up of a Minority Commission. He told the delegation that he had suggested setting up of a minority committee during the intervening period that the bill is finally passed.

He further stated that there were some Supreme Court judgments and decision is to be taken whether Catholic community in Goa fell within the purview of Minority Commission.

He cited an example of minority Muslim community, which are in majority in Jammu and Kashmir.