Was the curfew order only a farce to see that ‘Gou-rakshaks’ did not come together and oppose ?

Has the Government ever helped Hindus during celebration of their festivals ? 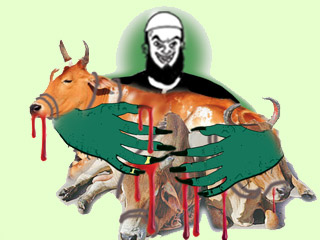 Ponda (Goa) – Mumbai High Court imposed certain restrictions on ‘Goa Meat Project’, situated at Usgaon, Ponda; but Court’s orders were ignored and bulls were sacrificed on 6th October. Shri. Hanmant Parab of ‘Gou-vansh Raksha Abhiyan’ gave the above information in a press conference held in the afternoon near the meat project. It was noticed that despite curfew orders, more than 5 Muslims were freely roaming near the project. Muslims were also given free entry in the meat unit. Till 6th October, 78 bulls were brought to the meat unit for slaughtering. Shri. Parab raised objection as an ‘animal-friend’ when 5 bulls were sent back. One of the bull among them was useful for farming and other 4 bulls were below 12 years of age. Last year, 14 bulls were slaughtered in this unit on the occasion of Bakri Eid; but this year, the number was going to be much higher.

Despite permission, ‘Gou-Premi’ stopped from taking photographs or making notes in meat project

From 4th October, representatives of ‘Gou-Premis’ were available to get information about number of cattle brought to the unit as per the Court’s orders; but the representative was prohibited from taking photographs or making note inside the unit by officers of the meat project. The above information was also given during the press conference.

Police were deployed in batches to maintain law and order around the project area.

On one side, Bhagavan Srikrushna nurtured and protected cows, whereas, look at the Goa Government favoring cow slaughter as a means of revenue generation on the other !

Where are the so-called environmentalists hiding now ?

Do they feel concerned about pollution only during Hindus’ festivals ? 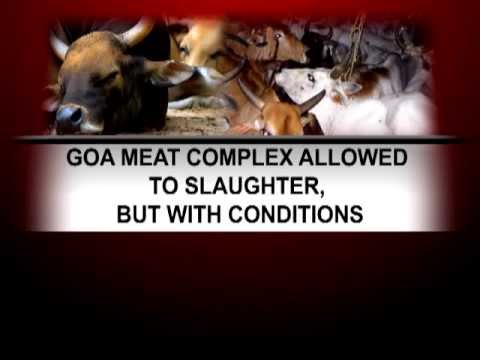 Panaji (Goa) : Due to Goa Government favoring the minorities and contention of Hindus, who revere ‘Gou-mata (cows)’, not being placed effectively before the court resulted in the Mumbai High Court order to the Goa Government to provide special facilities at its meat project at Usgaon (Goa) during the period of Barki Eid (4th to 7th October 2014). On 18th September, the Court gave time limit of 7 days to Goa Government for making arrangements for such facilities; besides asking the Goa Government to make a list of other places and inform the Court by 30th September, where slaughtering could be done during period of Eid. (Allowing slaughtering at other places besides meat project is like rubbing salt on Hindus’ wounds! – Editor, Dainik Sanatan Prabhat)

Advocate General Atmaram Nadkarni presented the case on behalf of the Government before Justice Bhushan Dharmadhikari and Justice Gadkari whereas advocate Subodh Kantak pleaded on behalf of ‘Gou-vansh Raksha Abhiyan’. The Court has ordered that test of cows/ cattle should be conducted through a veterinary doctor before they are brought to meat project as also 24 hours before their slaughter. CCTV cameras should be fitted at the entrance of the meat project and at the place where animals are examined by veterinary doctors. The Court dismissed the demand of Muslim organizations for not allowing visit of members of ‘Gou-vansh Raksha Abhiyan’ to the meat project and Justice suggested that one member of ‘Gou-raksha Abhiyan’ could visit; but in case of any objection, the same to be presented in Court instead of raising any objection at the venue.

Cow-slaughter taking place during Bakri Eid period has no religious base ! – Representation by Muslim Rashtriya Manch

Nowhere in Quran, has it been mentioned that cows / cattle should be slaughtered during Bakri Eid period. It has neither any religious base nor tradition. The demand by ‘all Goa Muslim Jamat’ is not proper, stated Muslims Rashtriya Manch in the Court.