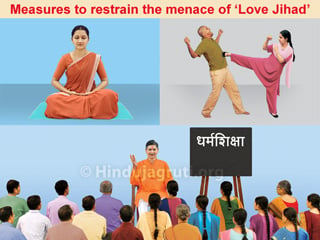 1. Precautions to be taken by Hindu girls and women

1A. To get help from the Hindus around in a difficult situation, apply kumkum (Saffron) to your forehead !

1B. If you have Jihadi friends or neighbours, keep a safe distance from them !

1C. To protect yourself from the sex-maniacs, learn self-defence techniques such as karate, nunchaku etc. !

2. Precautions to be taken by Hindu parents

2A. Learn about your daughter’s school or college life !

1. Keep a close watch on her daily activities. Keep a note of her school and college timings.

2. Note down the contact numbers of her friends – both, boys and girls. Learn about her activities from time to time.

3. Be cautious about her wearing a headscarf, since it becomes difficult to recognise a girl who wears a headscarf and sits behind a ‘Love Jihadi’ on a two-wheeler.

4. If she is participating in a college programme along with other boys, find out the details.

2B. Think of consequences before buying luxury items for your daughter !

1. Give her a new dress, ornaments, costly mobile phones, cameras etc. only after judging their necessity.

2. Since some cases of ‘Love Jihad’ have taken place with the help of mobile phones, check her incoming calls intermittently. Remember, that the saved number of a ‘Love Jihadi’ in her mobile may be under a false name.

2C. Communicate with her regularly and let her talk frankly ! :

1. During puberty, physical and psychological changes take place in a girl. Give her loving care. Create a feeling of closeness with her.

2. Talk to her informally for some time every day, understand her mindset and create an environment in the family so that she will be able to communicate frankly.

2D. Give Dharmashikshan (Education on Dharma) to the daughter and develop good sanskars in her from her childhood itself !

Hindu girls get converted due to lack of Dharmashikshan and failing to understand the greatness of Hindu Dharma. Therefore –

1. Impart sanskars of familial, social, cultural and spiritual values mentioned in Hindu Dharma on her mind from childhood itself.

2. Awaken in her a pride that she is born in a Hindu family and in Bharat.

3. Create on her a sanskar that her attire should conform with Hindu culture.

4. Encourage her to participate in activities such as Dharmasatsangs (Spiritual discourses to impart scientific education on various subjects like Dharma, spiritual science, spiritual practice, religious rituals etc.) and programmes on patriots.
5. Explain to her the importance of Hindu culture, Holy texts of Hindu Dharma, history and superiority of Hindu Dharma.

6. Give her Dharmashikshan, that is, education on philosophy and spiritual traditions of Hindu Dharma and make her a Dharmacharani (One who abides by Dharma).

2E. Tell your daughter about the agonising life of a Jihadi woman !

‘Polygamy, burqa, divorce, financial dependence, wifebeating and many offspring are the day-to-day sufferings of a Jihadi woman. Hindu parents should make their daughter aware of this life during her puberty.’ – Dr. Shrirang Godbole, Pune, Maharashtra.

2F. Introduce your daughter to the dangers of ‘Love Jihad’ !

2G. Protect the girl who is likely to become or has already become a victim of ‘Love Jihad’ as given ahead !

Given ahead is the classification of Hindu girls likely to become or have already become a victim of ‘Love Jihad’.

2G 1. A girl who is in contact with Jihadi boys with a natural feeling of friendship : Create in such a girl awareness with the help of her male or female friends, teachers and parents.

2G 2. A girl who is in a physical relationship with a Jihadi boy and hence, has lost her power of discrimination : If you feel that she has been subjected to vashikaran or black-magic, perform spiritual remedies on her as given here. Once she improves, get her married to a suitable Hindu boy.

2G 3. Abducted daughter : Parents should complain to the Police when this happens. If she is above 18 years of age, the Police tend to register it as a non-cognizable offence saying that she eloped of her own wish. Therefore, it is necessary that parents insist registering the offence as that of abduction of their daughter.

2G 3A. Understand the legal aspects of registering a complaint against a case of ‘Love Jihad’

3. An accused, regardless of his religion, is punishable under sections given ahead if a woman complains of harassment / torture by him.

D. Blackmailing a woman by threatening to defame her by publishing (or sharing with others) her obscene photographs or videos obtained (with or) without her consent

4. If a woman goes missing, even the neighbours can register a complaint with the Police.

2G 4. A girl who has returned home after realising that she has been cheated by a ‘Love Jihadi’ : If such a girl is married and converted, then after resolving legal hurdles, she should be taken back in Hindu Dharma after performing necessary rituals. Since such a girl has lost her confidence, help of a psychiatrist should be taken. So also make efforts for her economic rehabilitation.