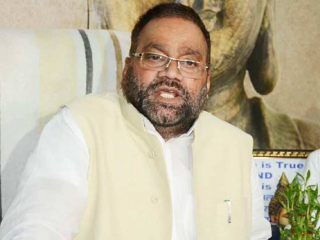 Samajwadi Party (SP) leader Swami Prasad Maurya on Sunday alleged that certain portions of the Ramcharitmanas ‘insult’ a large section of society on the basis of caste and said these should be ‘banned.’ The BJP in Uttar Pradesh demanded that he apologise and take back his statement.

Maurya, who is considered a prominent OBC leader in the state, said, “Religion is meant for the welfare of humanity and for strengthening it.” “If there is any insult to a section of society due to certain lines in the Ramcharitmanas on the basis of ‘jaati’, ‘varn’ and ‘varg’, then it is certainly not ‘dharma’, it is ‘adharma’. There are certain lines in which names of castes such as ‘teli’ and ‘kumhaar’ are mentioned,” he said.

Maurya claimed that “the feelings of lakhs of people hailing from these castes have been hurt.” “Similarly, a ‘chaupaai’ (verse) says that women should be punished. This amounts to hurting the feelings of women, who constitute half of the population,” he said in his comments on the Ramcharitmanas, a popular version of the Ramayana penned by poet Tulsidas. “If a debate on Tulsidas’ Ramcharitmanas is an insult… then why are religious leaders not worried about the insult to SCs, STs, OBCs and women. Are SCs, STs, OBCs and (a large number of) women not Hindus?” Maurya, who had quit the BJP to join the SP ahead of the 2022 Uttar Pradesh assembly polls, asked.

He demanded that “the objectionable portions of the Ramcharitmanas that insult on the basis of ‘jaati’, ‘varn’ and ‘varg’ should be banned”.