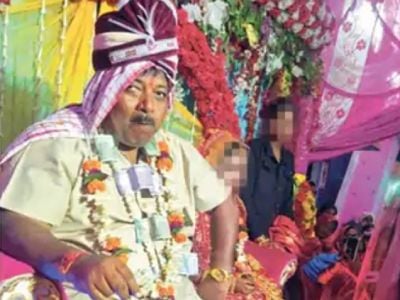 A new case of Love Jihad has come to the fore in Jharkhand’s Bokaro where a middle-aged man named Aslam Khan was marrying a Hindu minor girl while disguising himself as a Hindu man working in the police department. In Kumhar Toli of Sector-9 Harla police station area of ​​Bokaro, Aslam Khan (50 years) was marrying a minor by identifying himself as Sanjay Kasera.

As per a report in the Dainik Bhaskar, the wedding function was in progress and the Varmala was done when a labourer working at the venue identified Sanjay saying that he is not a Hindu and that his name is Aslam Khan. The labourer said that Aslam is a resident of Wasseypur in Dhanbad.

He informed the family that in 2021 while he was lodged in Chas Jail in a case, Aslam was also with him and both remained in jail together for 6 months. Following this revelation, a ruckus spread all over the function. Finding an opportunity to escape, Aslam fled the scene taking one of his cars while another was seized by the people there.

Following the event, the police questioned the girl’s family members at the Harla police station. According to family members, Aslam presented himself as a police officer and stated that Latehar was his current posting. He mentioned that he is an orphan and hails from the Kasera background. He went on the stroll wearing his uniform even before the wedding ceremony on Wednesday night.

The labourer who was with him in the jail disclosed Aslam’s secret. The neighbours spoke about the groom’s antics since they were against Hindu conventions. When the labourer arrived, he revealed that the groom was Aslam Khan and not Sanjay.

Raju Kasera, the minor’s father, explained that he runs a handcart and looks after the family. He has three girls and two sons, and their financial situation is dire. A cybercriminal had reportedly cheated his wife Saroj Devi with a fake prize in ‘Kaun Banega Crorepati’ 6 months ago. His wife and children were caught in his scam. The thugs robbed one lakh rupees from his entire savings up to this point. Later, the wife and daughter went to Dena Bank to apply for a loan. Aslam had introduced himself to the family there. He deceived them by posing as the manager of Dena Bank.

Then, after enticing them with the prospect of a loan, he began visiting their house. He introduced himself as Sanjay Kasera. After a few days, he began to visit them in police uniform. He stated that he works as a police officer. Aslam persuaded them and held captive the girl’s family on the promise of a residence. Following that, he put pressure on them to marry the girl to him. Because the family was destitute, they consented and began planning for the wedding. It was coincidentally on the day of the marriage that his identity was exposed and the truth came out, the girl’s father said.

According to accounts, police have been notified of the incident and further action is being taken by the authorities.