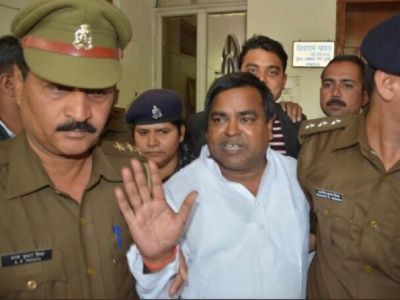 On Wednesday, December 7, the Enforcement Directorate (ED) attached properties of former UP cabinet minister and Samajwadi Party leader Gayatri Prajapati, who is currently serving a life sentence in a gangrape case.

ED attached properties in Lucknow and Amethi which belonged to Gayatri Prajapati and his family. An ED team reached Mau village in Mohanlalganj and confiscated four houses and land registered in the name of Gayatri Prajapati’s son Anil Prajapati. The value of the property is estimated to be Rs 4.5 crore. A board was installed on the attached property which read, “Under Section-8(4) of the Prevention of Money Laundering Act (PMLA) 2002, this property is under the possession of the Directorate of Enforcement, Government of India. Any transfer of it will be illegal. Strict legal action will be taken against the encroachment.”

Another property registered in the name of Gayatri Prajapati’s daughter Sudha was attached in Prajapati’s ancestral village Parsawan in Amethi.

In July this year, ED attached Gayatri’s properties worth Rs 10 crore in Lucknow’s Mohanlalganj area. Reportedly, the properties were registered in the name of Gayatri’s house help Ram Sahai.

The ED had previously attached several properties and bank balances worth Rs 36.9 crore belonging to former cabinet minister Gayatri Prajapati, his family members, and their companies.

A special court sentenced Gayatri Prajapati and two other individuals to life in prison in November 2021 for gang-raping a Chitrakoot-based woman and her daughter.

Notably, Prajapati held key portfolios of the transport and mining ministries during the Akhilesh Yadav government in Uttar Pradesh. He was arrested in March 2017 on charges of gang rape of a woman and sexual harassment of her daughter. Special judge PK Rai had pronounced Prajapati and two other accused, Ashok Tiwari and Ashish Shukla, guilty and asserted that the prosecution was successful in proving its case beyond a reasonable doubt.

Prajapati reportedly took photos and continued to rape her for two years by threatening to leak the photos. He also falsely promised to give her an important position in Samajwadi Party and a mining contract. The victim later filed a complaint. However, the UP Police refused to file an FIR. The woman then approached the Supreme Court, which directed the police to lodge a report. In February 2017 he absconded but was later arrested in Lucknow.