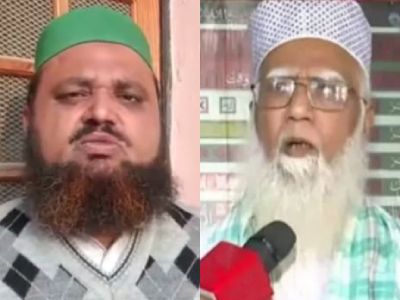 On December 5, Deoband’s Maulana Rao Musharraf lashed out at Shahi Imam Shabbir Ahmed Siddiqui of Ahemdabad for his statement against giving tickets to women candidates. In his statement, Musharraf alleged that earlier women used to visit mosques but they stopped as Imams molested them and clerics tried to rape them.

Imam Mufti Kaari Arshad Gaura of Saharanpur also criticised Siddiqui for the statement. He said, “There are several rights in Islam that have been given to women but not men. We are seeing in the media that some people are saying women should not do this, women should not do that, and claim it is against Sharia. I feel that such statements come to the fore during elections and are given by some people to create disturbance in society. Our country is a democratic country. It runs on the constitution. I believe that such statements should not be highlighted. If someone wants to get information on laws in Shariat, then he or she should not believe the statements given by the Imams. They should approach Darul Ifta and get the answers in writing.”

‘Giving tickets to women is against Islam’

Notably, Siddiqui recently opposed the idea of giving tickets to women candidates. He questioned if no men are left to do politics and that the political parties are giving out tickets to women to contest elections. In a statement on December 4, Siddiqui said, “Those who give election tickets to Muslim women are against Islam, weakening the religion. Are there no men left?” Speaking to the news agency ANI, he said, “You just saw namaaz being offered, did you see any woman? And in Islam namaaz has been given the highest importance. If women coming out in open like this were allowed in Islam, they would not have been barred from the masjid. Why they are barred from mosques? Because there is a place for women in Islam. Therefore who are giving tickets to Muslim women are revolting against Islam”.