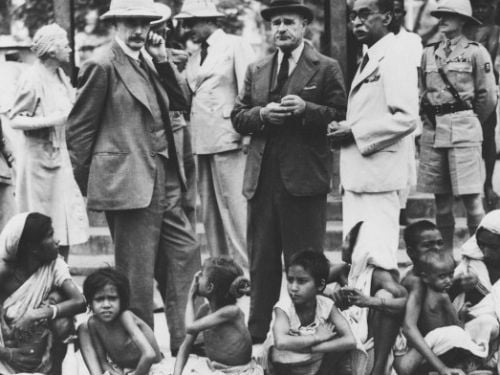 The British colonialism in India led to the death of over 100 million people in 4 decades from 1880 to 1920, the peak of British imperialism, a new study published in the journal World Development said. The research, titled ‘Capitalism and extreme poverty: A global analysis of real wages, human height, and mortality since the long 16th century’ and authored by Dylan Sullivan and Jason Hickel, underscores the depth of human tragedy colonialism inflicted on India with few parallels in the recorded history.

The study found that extreme poverty was unusual and only appeared during periods of profound social and economic turmoil, particularly during colonialism. As capitalism has developed since the late 16th century, wages have fallen below subsistence levels, human height has declined, and the number of premature deaths has increased.

Native populations in parts of South Asia, Sub-Saharan Africa, and Latin America have not yet fully recovered, according to the report. Only around the turn of the twentieth century did human well-being begin to rise significantly, concurrent with the rise of democratic and anti-colonial political movements.

The authors estimated the number of individuals who perished because of British colonial practices throughout four horrific decades from the 1880s to the 1920s using census data. Reliable statistics on death rates in India go back to the 1880s. Using it as the baseline for “normal” mortality, it was discovered that 50 million additional fatalities occurred under the auspices of British colonialism between 1891 and 1920, taking the count of total deaths caused by imperialism to above 100 million—a scathing indictment of the British colonialism and a grim realisation for the apologists who yearn for Britain’s colonial legacy and believe it brought prosperity and development to the colonies it governed.

Fifty million fatalities is a startling number, yet this is only a conservative estimate. According to data on actual earnings, living standards in colonial India had already fallen considerably from their prior levels by 1880.

If the mortality rate in India before colonisation was comparable to that in England in the 16th and 17th centuries (27.18 deaths per 1,000 people), then 165 million more individuals died in India between 1881 and 1920. While the exact number of fatalities is dependent on the assumptions used for baseline mortality, it is evident that between 1880 and 1920, during the height of British colonialism, around 100 million individuals died before their natural age.

This is one of the most severe policy-caused mortality crises in human history. It exceeds the total number of fatalities from all famines in the Soviet Union, Maoist China, North Korea, Pol Pot’s Cambodia, and Mengistu’s Ethiopia.

There are various ways in which British control contributed to this massive loss of life. For starters, Britain virtually devastated India’s industrial sector. Prior to colonial rule, India was one of the world’s major industrial suppliers, sending high-quality textiles to every corner of the globe. However, this began to change in 1757, when the British East India Company took control of Bengal.

The colonial regime, according to historian Madhusree Mukerjee, virtually abolished Indian tariffs, allowing British goods to flood the domestic market, but it also established a system of absurdly high taxes and internal duties that prevented Indians from selling, let alone exporting, textiles within their own nation. India’s industries were wiped out by this unjust trade policy, thus deindustrializing it.

To make problems worse, British colonists developed a system of legal thievery known as the “drain of wealth.” Britain taxed the Indian people and used the proceeds to purchase Indian items like indigo, grain, cotton, and opium, thus acquiring these things for free. The British government received the revenues from the sale of these goods, which were either consumed in the UK or exported once again.

This approach depleted India of products worth trillions of dollars now. The British were ruthless in implementing the drain, compelling India to export grain even when drought or floods endangered domestic food security. Historians have determined that tens of millions of Indians perished of starvation during three significant policy-induced famines in the late nineteenth century, as their resources were diverted to Britain and its colonial possessions.

The effects of their policies were well understood by colonial officials but they stood by as millions went hungry, refusing to change direction. They continued to willfully deprive them of basic survival essentials.

The authors of the study also established a solid argument for reparations, which has a long history in international law. They argue that while history cannot be reversed and the sins of the British empire cannot be erased, reparations can assist address the legacy of deprivation and unfairness left by colonialism as a key step toward justice and reconciliation.