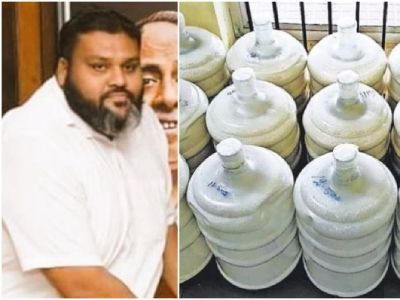 On Tuesday, the Tamil Nadu coastal Police arrested a DMK councillor and a former councillor for attempting to smuggle cocaine worth Rs 360 crores from the Ramanathapuram district. The accused intended to transport the cocaine worth crores of rupees to Sri Lanka.

According to the reports, the arrested accused persons have been identified as Jainuddin (45), a former DMK councillor of Keezhakarai municipality, and Sarbraz Nawaz (42), currently the DMK councillor of the 19th ward of Rameshwaram. The incident came to light after the coast guard police officials conducted an intensive surveillance activity on the Mandapam-Vedalai road in Ramanathapuram district.

During the search on 26 November, cops stopped a racing luxury vehicle and discovered 30 containers holding 20 litres of raw cocaine. Following an inquiry, it was found that Sadiq Ali, 36, of Rameshwaram, owned the boat that was to be used to transfer the cocaine to Sri Lanka. The Police then confiscated the drugs and arrested the brothers in the car, Jainuddin and Sarbraz Nawaz.

The confiscated substances are worth over Rs 360 crores as per international value. Reports mention that authorities in the Ramanathapuram district had never before discovered such high-value narcotics intended for smuggling to Sri Lanka.

The DMK brothers, who have been arrested for attempting to smuggle drugs to Sri Lanka, own and operate a cargo logistics company. Central and state intelligence services investigated them to determine their connections with mafia organizations or worldwide drug trafficking networks.

Meanwhile, the fishermen community has expressed shock over the incident of smuggling drugs to Sri Lanka in a country boat by anyone disguised as a fisherman. The fishermen stated that such incidents affect the livelihood of the community and the Sri Lankan Navy becomes concerned and used this as an excuse to detain and arrest them.

The Bharatiya Janata Party and All India Anna Dravida Munnetra Kazhagam also took cognizance of the incident and slammed the state government. The opposition parties said that the incident was one more instance showcasing DMK’s poor administration.