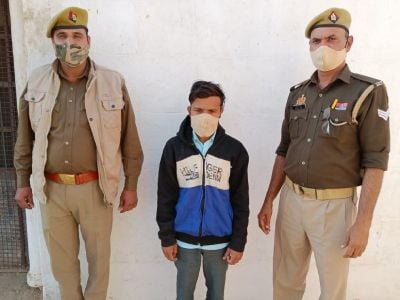 One Suhail has been arrested by police for allegedly kidnapping a 15-year-old Hindu girl from the Dalit community in Uttar Pradesh’s Baghpat district. The accused has been booked under IPC Sections 363, 506, POCSO Act Section 7/8 and Section 3 (20(V)(a) of the SC-ST Act.

The case pertains to the Singhawali Ahir police station area in the Baghpat district. As per reports, the 15-year-old girl went missing last Wednesday (November 23) from her school at 08:30 AM. Following this, a complaint of kidnapping was registered at the local police station at 10:30 AM and the police started investigating the matter. The girl is the niece of the Bharatiya Janata Party District General Secretary.

As soon as the information about the kidnapping was received, officers from many police stations launched a search operation in the neighbouring woods, led by the Superintendent of Police. The dog squad was also called in to assist in the quest for the female student. After much searching, the police discovered her uniform and school bag in a neighbouring forest.

The search was intensified, and the girl was eventually found in a section of the forest at about 06:30 PM on November 23. Superintendent of Police Neeraj Kumar Jadaun stated that the missing girl was found safe and sound in the jungle at about 6.30 PM. According to the SP, the girl student was taken to a local hospital for a medical assessment. The SP awarded a Rs 25,000 prize and citation to the police team in charge of the matter.

The accused was arrested from the spot by the police. Later, he was identified as Suhail son of Abbas resident of Singhawali Ahir village in Baghpat. He was booked for kidnapping the girl (IPC Section 363), attempting to outrage the modesty of a woman (IPC Section 506), and sexually exploiting a minor girl (POCSO Act) and relevant sections of the SC-ST Act. The accused is now in police custody and further action is now being taken by the authorities.