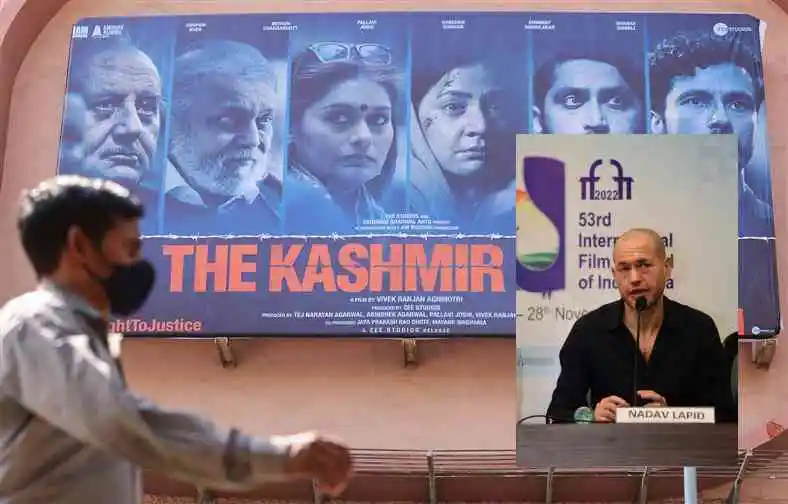 On November 29, an Israeli filmmaker and International Film Festival of India (IFFI) jury chairman Nadav Lapid said called filmmaker Vivek Agnihotri’s film ‘The Kashmir Files’ “vulgar” and “propaganda”. During his closing remarks at the festival, he said he was “shocked” and “disturbed” by the inclusion of the film in the competition section. The 53rd edition of IFFI was held in Goa between November 20 and November 28.

Lapid was sharing the jury report during the closing ceremony of the festival. He said, “Usually, I don’t read from paper. This time, I want to be precise. I want to thank the director and head of the programming of the festival for its cinematic richness, diversity and complexity…There were 15 films in the international competition — the front window of the festival. Fourteen out of them had cinematic qualities…and evoked vivid discussions. We were, all of us, disturbed and shocked by the 15th film, The Kashmir Files. That felt to us like a propaganda, vulgar movie, inappropriate for a competitive artistic section of such a prestigious film festival.”

He added, “I feel totally comfortable to share these feelings openly here with you on stage since the spirit that we felt in the festival can surely accept a critical discussion which is essential for art and life.”

#NadavLapid's "vulgar" remarks on #KashmirFiles may have come out of ignorance or arrogance.

He must open his eyes, learn the truth and #NadavMustApologize to Hindus for denying a major part of our history, the Kashmiri Hindu Holocaust.#TheKashmirFiles#KashmiriPandit pic.twitter.com/IkAHIcb1gG

.@MIB_India & @iAnuragThakur must ensure that @IFFIGoa jury members are aware of Indian & Hindu sensibilities and not let them use IFFI as a platform to spew their bile.@MIB_India must ensure that #NadavMustApologize before he leaves India soil.#TheKashmirFiles#NadavLapid pic.twitter.com/vAg1N6iCXq

Who is Nadav Lapid?

Nadav Lapid is an Israeli filmmaker with around 13 films to his credit as a director. He was born in Israel’s Tel Aviv. The lesser-known 47-year-old filmmaker is best known for “hate” towards his own homeland, Israel. A Palestinian sympathiser, Lapid, 2019, talked about his film Synonyms to Now Toronto magazine and called the collective soul of Israel a “sick soul”.

‘I am ashamed’, Israeli Ambassador to India apologises

Israeli Ambassador to India, Sri Lanka and Bhutan, Naor Golin on Tuesday called out the Left wing Jewish filmmaker Nadav Lapid, who referred to the film based on Kashmiri Hindu genocide perpetrated by Pakistan-backed Islamist terrorists in the late 1980s, early 1990s, as ‘vulgar propaganda’.

In an open letter Ambassador Golin shared on Twitter, he said that Lapid should be ashamed of himself.

An open letter to #NadavLapid following his criticism of #KashmirFiles. It’s not in Hebrew because I wanted our Indian brothers and sisters to be able to understand. It is also relatively long so I’ll give you the bottom line first. YOU SHOULD BE ASHAMED. Here’s why: pic.twitter.com/8YpSQGMXIR

Reaction from the film fraternity

The Kashmir Files’ director Vivek Agnihotri took to Twitter and wrote, “GM. Truth is the most dangerous thing. It can make people lie. #CreativeConsciousness (sic).”

Truth is the most dangerous thing. It can make people lie. #CreativeConsciousness

Veteran actor and one of the leads in The Kashmir Files, Anupam Kher, reacted to the Israeli filmmaker’s remarks. He said, “No matter how high the height of the lie is.. It is always small in comparison to the truth,” while sharing images from the film and films based on the Holocaust. Kher did not take any names in his tweet.

We'll give proper reply. If holocaust is right, exodus of Kashmiri Pandits is right too. Seems pre-planned as immediately after that toolkit gang became active. Shameful for him to make a statement like this: Anupam Kher, on IFFI Jury Head Nadav Lapid's remarks for #KashmirFiles pic.twitter.com/WH4u7Pl74J

Filmmaker Ashoke Pandit wrote multiple tweets on the matter. He said, “I take strong objection to the language used by Mr Nadav Lapid for The Kashmir Files. Depicting the genocide of 3 lakh, Kashmiri Hindus cannot be called vulgar. I, as a filmmaker and a Kashmiri Pandit, condemn this shameless act of abuse towards victims of terrorism.”

He added, “Dear Anurag Thakur Ji, I, as a Kashmiri Pandit who is a victim of genocide, seek serious action against Mr Nadav Lapid, Jury head of IFFI 2022, for calling the depiction of our tragedy as vulgar. He has added salt to our wounds and hence should be made to tender an apology.”

Dear @ianuragthakur ji .
I as a #KashmiriPandit & who is a victim of genocide seek a serious actn agnst Mr. #NadavLapid Jury head of IFFI 2022 fr calling d depiction of our tragedy as vulgar .
Hs hs added salt to our wounds&hence shld b made to tender a apology .#KashmirFiles

I take strong objection to the language used by Mr. Nadav Lapid for #kashmirFiles .
Depicting the genocide of 3 lakh #KashmiriHindus cannot be called vulgar .
I as a filmmaker & a #KashmiriPandit condemn this shameless act of abuse towards victims of terrorism .

He said, “Nadav Lapid’s selection as the jury head of IFFI53 Goa is a major lapse on behalf of the I&B ministry. Hence heads of those in the ministry, who are responsible for this crime, should roll. What does one expect from a Palestine sympathiser?!”