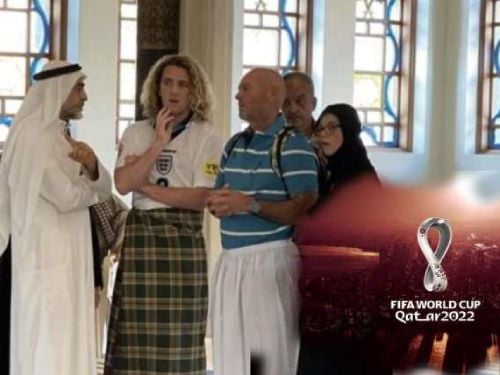 Qatar, which is hosting the 2022 FIFA World Cup, has come under scrutiny for the various restriction and bans imposed at the World Cup stadiums. Besides, the Islamic country has been drawing flak for utilizing a variety of strategies to convert people to Islam who have come to the country to attend the World Cup. According to a recent report, the Katara Cultural Village Mosque in Doha, Qatar’s capital, has become a hotspot for the proselytization of non-Muslim visitors.

As per media reports, at the mosque, multilingual male and female preachers explain Islam’s religion and ‘tolerance’ to tourists. Visitors are being encouraged to watch electronic boards on Islam which are on display in more than 30 languages and positioned in such a way that it allows visitors to view them on their phones. In addition, books ‘introducing’ Islam in different languages are being distributed amongst the visitors.

Furthermore, Qatar’s Ministry of Awqaf and Islamic Affairs has erected a pavilion outside the 2022 World cup venue, where visitors are being ‘introduced’ to Islam and its teachings.

The report further suggests that the hadiths, which are words, actions, or habits of Prophet Muhammad, are found written on the walls of streets to attract non-Muslim tourists visiting Qatar to enjoy FIFA World Cup 2022.

Employees and preachers from the Qatar Guest Centre are stationed at the mosque’s entrance to promote Islam to the Eid Charity Foundation. They welcome non-Muslims and answer their queries about the mosque. They also arrange for visitors to enter the mosque after prayers in order for them to become acquainted with the inside ambience of a mosque.

Qatar has also made an effort to feature Islam and Muslim culture throughout the first week of the tournament with sayings and teachings of the Prophet Muhammad posted around Doha and translated into multiple languages including English.

So much so that the FIFA World cup inaugural ceremony had also begun with a female vocalist dressed in a traditional burqa, a face covering outlawed in several European countries, reciting a Quranic verse.

In hotel rooms in Qatar, there is a QR code that introduces the teachings of Islam, hadiths, and a simple definition of our faith. pic.twitter.com/NcHge7L48x

How religion has grabbed the spotlight amid the football tournament can also be evidenced by the fact that the radical Islamic preacher Zakir Naik has been reportedly ‘invited’ to preach Islam to football fans.

Recently, it was reported that Zakir Naik, the Islamic Preacher from India wanted for financial fraud and other crimes, reached Qatar to preach Islam. A video from 2016 went viral where he was seen converting people to Islam in Qatar. Though the video was old, there are speculations that his preaching on the sidelines of the FIFA World Cup 2022 may be directed at conversions of visiting football fans.

After concerns were raised by India, Qatar clarified that Naik was not extended any official invitation to attend the FIFA inaugural ceremony.

On November 22, several Islamist handles claimed in a tweet that over 500 people (apparently tourists visiting Qatar to enjoy FIFA World Cup 2022) have converted to Islam. In the tweet, a pro-ISIS Islamic activist Majid Freeman wrote, “Allahu Akbar! We’ve heard from local daees in Qatar that 500+ people have embraced Islam recently.” Though no official media reports were found to support the claims.

Furthermore, reports emerged that a Mexican fan embraced Islam in a mosque in the Katara cultural village in Doha, on the second day of the World Cup 2022 in Qatar.

On November 23, viral videos showed how a Brazilian family of six consisting of a father, mother, and four children (3 girls and a boy), was seen pronouncing Shahadah (testimony of faith), prompted by the preacher.

Qatar won the right to host the summer World Cup in December 2010 against all odds in 50 degrees celsius temperature, before FIFA moved the World Cup to winter for the first time in history to protect players from that heat. The tournament is now being held in the small Arabian country and about 1.2 million international visitors are expected in Qatar during the Nov 20- Dec 18 tournament.

It is notable here that Qatar has been linked with Islamic terrorism and has been accused of spreading Wahabism by many sources. Its links to numerous organisations that fund the Muslim Brotherhood, Hamas, Al Qaeda etc have been highlighted in recent times.