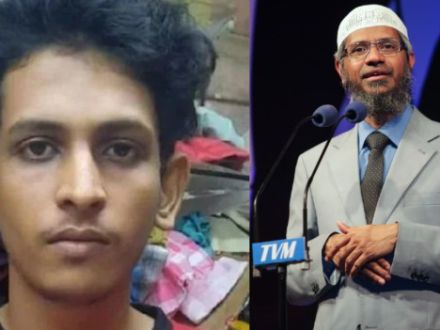 According to a report by Republic Bharat, Mangaluru auto blast suspect Mohammed Shariq was inspired by radical Islamic preacher Zakir Naik. This allegation is substantiated by the fact that Zakir Naik made a tweet regarding the suicide bombing within hours after the blast in the auto in Mangaluru was reported.

On November 19, at 6:13 p.m., Zakir Naik tweeted about suicide bombing while the Mangaluru auto blast occurred at 4:29 p.m. on the same day. From his official YouTube channel, which has over 3 million subscribers, he released a video titled “Is Suicide Bombing Allowed in Islam?”

Interestingly, Shariq, the suspect in the Mangaluru bomb, had multiple videos of Zakir Naik on his phone. He allegedly referred to him as his true inspiration. More than 50 videos of Zakir Naik’s talks, according to the sources cited by Republic Bharat, were discovered on Shariq’s phone.

Days after the explosion in Karnataka’s coastal town Mangaluru was confirmed to be a homemade pressure cooker bomb, it has come to light that the accused in the case, Mohammed Shariq, utilised cryptocurrency to carry out the terror operation.

Reportedly, the probing agencies noted that Shariq and his handlers used cryptocurrencies and the dark web to make financial transactions and received funds online to execute the blast. Shariq traded in bitcoins and received funding online from the Middle east for the terror operation. Cryptocurrency has emerged as a major threat in terms of terror funding and the Police in this case are closely investigating its involvement.