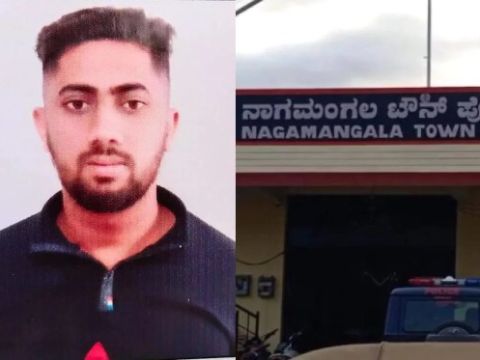 In Mandya’s Nagamangala town in Karnataka, a married Muslim man has been arrested under Karnataka’s anti-conversion act and POCSO for raping a minor Hindu girl and forcing her to convert to Islam. The 25-year-old accused has been identified as Yunus Pasha, who is a married man. He was arrested after the girl’s father lodged a complaint with the police. Yunus is accused of sexually assaulting the girl, taking her nude photos and using them to blackmail her. He had also said that he will marry her if she converts to Islam.

Accused Yunus Pasha reportedly befriended the 13-year-old Hindu girl in Nagamangala town in Mandya district, and gave her a mobile phone through a boy in her class in the school to keep in touch with her. They started to talk on the phone regularly, and Yunus gradually gained the trust of the victim and convinced her to talk to him over WhatsApp video calls.

#Karnataka police arrested a man on charges of making obscene videos of a minor girl, blackmailing and raping her.

The arrested person has been identified as 25-year-old Yunus Pasha. pic.twitter.com/PJZZQWbtE3

As per the victim’s police complaint, the accused gave her an Oppo smartphone and a SIM card and then forced her to connect over video calls. He then started coercing her to show her private parts on the video calls and recorded those videos.

The victim in her complaint alleges that the accused used her nude videos and pictures to blackmail her into having sex with him. Yunus Pasha threatened to spread private videos of the victim on social media if she does not agree to have physical relationship with him.

Recently the girl’s parents had gone out of town and she was living at her grandmother’s place. Taking advantage of this situation, Pasha went to the girl’s grandmother’s house on November 10. He gave her sleeping pills, asking her to mix them with the sambhar that her grandmother would be eating. Then on November 11, Yunus Pasha went to the house and raped her. He also promised to marry the Hindu girl if she converted to Islam.

According to the complaint, the accused threatened to kill the girl and her family if she revealed the truth to anyone.

The victim’s father told the police that after they returned, his daughter looked very stressed on November 12-13. When the parents started to question her, she revealed her ordeal. Following that the parents approached the police and lodged a case.

According to the police, the accused has been arrested and charged under the Karnataka government’s new anti-conversion law and POCSO Act and further action will be taken.