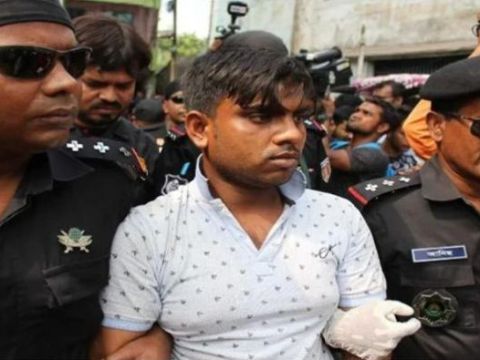 Another shocking news of love jihad following a brutal murder of a Hindu has come out from Bangladesh. In the Gobarchaka area of Khulna city, one Abu Bakr first trapped a Hindu woman in love, then brutally killed her and chopped her into several pieces.

The matter came to light on Sunday, 6th November, when the accused Abu Bakr didn’t arrive for his work and his phone was switched off. When the owner of the transport company where he works sent someone to his rented house to know the matter, that person found the house locked, and informed the landlord. As the situation was suspicious, the landlord Raju informed the police. After arriving at the spot, police opened the door and found the headless body of the Hindu woman in a box in the house. On further search of the house, they found the head wrapped in polythene, but her hands were missing.

The landlord informed the police that he does not know the woman and that she is not the wife of Abu Bakr. Later police identified the victim as Kavita Rani, daughter of Kalipad Bachar.

Absconding Abu Bakr was the prime suspect in the case, and police arrested him on 7th November 2022, along with his live-in partner Sapna.

Abu Bakar Siddiqui cut the body of his Hindu lover Kavita Rani into three pieces and cut off her head and both hands wrapped in plastic polythene and threw it into the drain. The incident took place in Khulna, Bangladesh. pic.twitter.com/Y129SnB4dp

He said that the arrested Abu Bakr and his live-in partner Sapna were living as husband and wife in the house of landlord Raju in Gobarchaka Square Number 1 for 4 years. Sapna works as a nurse at Prince Hospital in the city. Abu trapped Kavita in an affair despite already being in these relationships.

Kavita and Abu Bakr had met a few days before the murder. The accused met the woman just five days before the incident. He had brought Kavita to his rented house in the evening on 5th November 2022, Saturday. At that time, Sapna had gone to work as she is working the night shift at the hospital.

At the house, they had sex. But after that, an argument broke out between the two for some reason. When Kavita started to shout and argue loudly, Abu Bakr got angry and strangled her to death. Later, to dispose of the body, he brought a sharp knife from the kitchen and severed Kavita’s head from the torso. Abu Bakr wrapped his severed head in a polythene bag. After that, he also cut the two hands and disposed of them in a drain. He put the rest of the corpse in a box at the house.

The RAB official also revealed that the same night (November 5, 2022), Abu Bakr crossed the Rupsa river with his live-in partner Sapna and left for Dhaka. But after the recovery of Kavita Rani’s body from his rented house the next day, the police launched a search operation.

Police as well as RAB Intelligence traced the whereabouts of accused Abu Bakr on the night of November 6, 2022. He and Sapna were then arrested from the Chaurasta area under the Basan police station area of Ghazipur district. Police handed over the arrested accused to the Sonadanga police station.

After the accused confessed to the crime, the RAB recovered Kavita’s severed hands wrapped in polythene from a narrow spot in the Gobarchaka area of the city, based on his information.