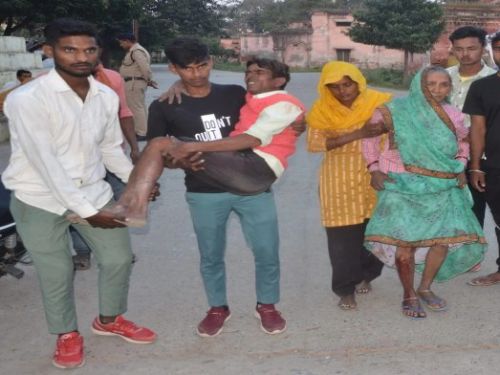 Communal violence erupted in the Majhavali village of the Baniyather in Sambhal, Uttar Pradesh, according to reports, after some schoolgirls were teased by men from another community. So far, the police have registered a case against 14 people, including 13 identified suspects, and arrested six of them.

Akram, Rihan, Mohammad Sajid, Maharwan, Aslam, Shanu, Sher Mohammad, Shahnawaz, Nadeem, Nizamuddin, Shamshad, Mushabbar, and Mohammad Zaid have been identified as the ones named in the FIR. In the ensuing brawl and stone pelting, five people were hurt, including two women.

During this some people started abusing the girls present in the school. They were peeping through the windows and doing acts like sneaking. On protesting it, stone pelting and firing started by a community to the people of other community.
+

The stone pelting started after Hindus in the village protested against some Muslim harassing Hindu schoolgirls. Vishal, a local inhabitant, works at RP Singh Public School in Majhawali. On Sunday, from 12.30 PM to 1.30 PM, there was a general knowledge competition at the school. At 11.30 AM, youngsters from the Muslim community were passing obscene remarks at the girl students who were heading to school.

Vishal urged the youngsters to vacate the school gate when he noticed this. There was a verbal argument between Vishal and the mob that was passing lewd remarks against the girls. Vishal then returned to his village with his brother Vivek. The youths from the other community then encircled him and began hitting him. Vivek anyhow escaped the scene and notified his family about the occurrence. Following this, his father Ghanshyam, mother Indravati, grandmother Kishanvati, and neighbour Anshu Giri arrived at the spot and tried to save Vishal.

The offenders then attacked these five people, including both women, by viciously hitting them. Meanwhile, additional villagers arrived on the scene, and the offenders began pelting stones.

Soon, the altercation took the form of communal violence where the persons involved in the harassment of school girls started stone pelting and were joined by other members of their community, as per reports.

Following reports of violence in the village, ASP Shreeshchandra, CO Dinesh Kumar, Thana Baniyather Incharge Mukesh Kumar reached the spot along with the police force and PAC. When the attackers and stone-pelters saw the police, they began to flee, but the police apprehended six persons on the spot.

The assault and stone pelting injured residents including Anshu Giri, Vishal, his father Ghanshyam, his mother Indravati, and grandmother Kishanvati. The injured were taken to the CHC by police for treatment. Police filed an FIR based on Vishal’s complaint, identifying 13 persons and keeping one anonymous. Following the incident, PAC was deployed in the area to ensure law and order.