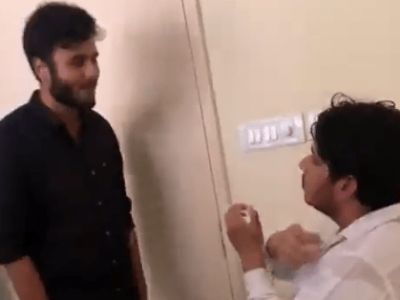 On Saturday, 12 November 2022, a video went viral on social media where a student of the ICFAI Foundation for Higher Education (IFHE) in Hyderabad, Himank Bansal, was being beaten up by the other students of the institute and forced to chant ‘Allahu Akbar’.

In the video shared extensively on social media, a group of students can be seen beating up and threatening Bansal inside a hostel room.

Will this be covered as #Islamophobia_in_india by @AJEnglish @BBCWorld @trtworld ?pic.twitter.com/LVaJnELxz9

Following the assault, Bansal filed a complaint with the police where he detailed the circumstances leading up to the attack on him.

In his complaint, Bansal mentioned that one of his friends from 1st year BA-LLB course, Dipasha Sharma, called him a pedophile for being friends with a girl 3 and a half years younger than him. When Bansal tried to defend himself saying he doesn’t want any sexual relations with her and cited references from Islamic scriptures to explain how he is not wrong, the girl shared his messages with everyone else in college.

As per the complaint by Bansal, subsequently, 15 to 20 guys burst into his hostel room and beat him up while accusing him of hurting religious sentiments. The assaulters further asked him to chant Allah-hu-Akbar while beating him up. He was also threatened during the course of the assault, as were his family members.

The group of students also asked him to remove his trousers, and upon refusal further physically assaulted him. Himank Bansal has named several of these people in his complaint with details of their respective actions during the assault.

Video and photographic evidence of the assault has also been submitted to the police along with the complaint by Bansal. Following his complaint, the Cyberabad Police shared that a case has been registered on 11th November 2022 by Shankarpally Police Station against the culprits under the provisions of 307, 342, 450, 323, 506, R/W 149, IPC, and Sec 4(I),(II), and (III) of the Prohibition of Ragging Act of 2011

Further action is being taken in the case by the police. The institute has also initiated action against the students involved in the assault as well as Himank Bansal.