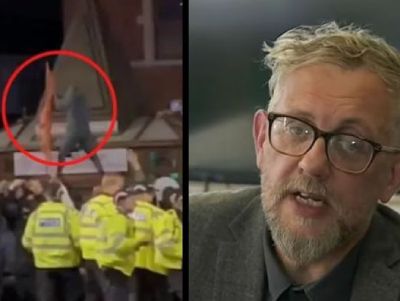 Professor Dr. Chris Allen, a known Islamist sympathizer and known for his prejudiced views about Hindus was recently named by Leicester mayor peter Soulsby to lead an ‘independent inquiry’ into the Leicester violence. After the local Hindus residents raised objections over his selection, Allen stepped down.

When Peter Soulsby made the announcement on Wednesday, October 26, he said Dr. Allen, an associate professor of hate crimes at the University of Leicester (UoL), came highly recommended to him by a “range of people” from varied backgrounds. However, within 24 hours, the decision had been widely condemned by local councilors, several local Hindu organizations, and on social media.

Chris Allen has now “reluctantly” decided to pull out, stating that he no longer believes he can conduct the review impartially “in the current climate.”

“I have reluctantly taken the decision to step down from the role because I no longer feel confident that my team and I are capable of conducting the review in such a way that the resulting findings would meet the necessary levels of academic scrutiny,” Dr. Allen said.

Professor Allen also claimed that his pulling out from the review was not in response to the allegations made against him on social media or the ‘hate’ he has been receiving ever since the announcement of his appointment.

“It is important to stress that my decision was not made in response to the unprecedented hatred directed at me in previous weeks or the false accusations circulating on social media.”

Mayor Peter Soulsby, who commissioned the review, said he understood the decision and will seek to appoint another person or organization to carry it forward, in a way that has the confidence of all the concerned parties.

“I think that it is important to proceed with a review, and will be taking cues locally and nationally on whether any individual or organization could take it forward in a way that has the confidence of all concerned parties,” he said.

“I have today been appointed lead for the independent review into the recent disturbances in East Leicester,” Dr. Allen wrote in a tweet. A tremendous honor for me personally and professionally…”

Soon after the news of Chris Allen’s appointment broke, representatives of 15 Hindu organizations reportedly, vowed to boycott the inquiry led by Dr. Allen.

In a statement on Thursday (October 27), they said: “Though we do not make any judgments regarding the presence of any extreme Islamist influence in the unrest, to make a conclusion prior to the review highlights Allen’s inability to remain independent.”

Hindu organizations had also expressed “little confidence” in Mayor Peter Soulsby’s decision-making process after he had previously blamed the Leicester violence on Hindutva. They also accused the Mayor of breaking his promise by announcing the investigation findings before the end of the festive season.

The right response to a Labour council that has legitimised and aided the Islamist agitators who have been causing trouble in Leicester.

The Labour party doesn't care at all. It just looks away. pic.twitter.com/lpz8d7FXik

Harborough MP Neil O Brien took to Twitter to inform about the letter he wrote to Mayor Peter Soulsby and wrote, “The letter I sent to Sir Peter Soulsby today, Dr. Allen has now rightly gone.”

Chris Allen, 52, is an associate professor at the University of Leicester. He is an expert on ‘Islamophobia, hate, and extremism,’ according to his Twitter profile (which has now been deleted).

In September of this year, he authored a propaganda piece in The Conversation in which he blamed the Leicester violence on Hindus while absolving Islamists of any wrongdoing.

Notably, in addition to Hindu organizations, several reputed journalists have raised concerns about Dr. Chris Allen’s lack of ethical and academic objectivity in his writings.