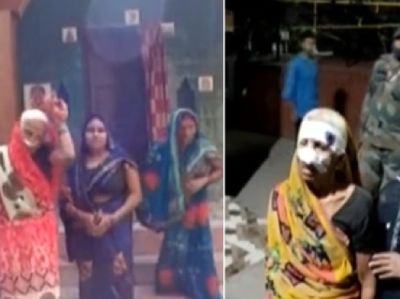 On Tuesday, the Bihar police lodged an FIR against around 15-20 unidentified Islamists for attacking 3 Hindu women who had gone to a temple to worship Lord Hanuman in Gopalganj district. Three of the accused Islamists have however been identified as Golden Ahmed, Subrati Ahmed and Sadidan Khatun. The Police have booked the accused under the relevant sections of the IPC.

According to the News18 report, the incident is said to have happened at the Hanuman Temple in Gopalganj area of Bihar. The three women were beaten by the people belonging to the Islamist community for playing bhajans on the loudspeaker at the temple. The Islamists also attacked other people who tried to save the women.

The three women were severely injured and were immediately taken to the local hospital. “They beat us for worshipping the God and for playing bhajans on the loudspeakers. They (Islamists) usually beat people who come to worship Lord at this temple”, one of the victims named Gulabi Devi confirmed.

According to reports, the temple was playing devotional songs on the occasion of Navaratri and Durga Puja. But the Muslims in the area had opposed the usage of loudspeakers during the Hindu festival. They had asked the temple authorities to shut the loudspeaker, failing which they brutally assaulted the women who had come to the temple to worship on October 4.

The Police taking the cognizance of the event maintained that an official complaint had been filed in the case and that the investigation was underway. Sanjeev Kumar, SDO, Gopalganj said, “The issue is between the two communities. One community cannot force the other one from practicing their religion. The local administration has also set up a committee to resolve the issue. Both the parties have been heard and have been asked to maintain peace ahead of the festivities”.

The Police have booked Golden Ahmed, Subrati Ahmed and Sadidan Khatun and 15-20 other unidentified Islamists for attacking the Hindu women in the temple. The case has been lodged under the relevant sections of the IPC. Further investigation in the case is underway.