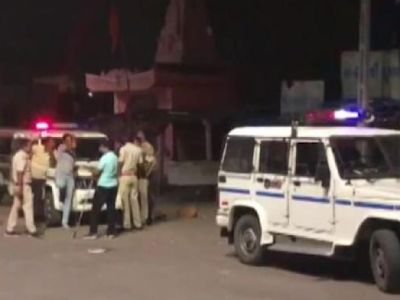 On October 3, Salvi Police booked at least 46 people and arrested 40 following a communal clash near a Hindu temple Damaji na Dera, in Salvi, Vadodara. As per reports, Muslim youth attempted to install Islamic flags near the temple on an electric pole where Hindu flags were already installed. A group of Hindus approached them and asked them not to install the Islamic flags as it would hurt their religious sentiments.

PR Patel, Vadodara Rural Police, said, “A Muslim festival is coming up, owing to which a local group had tied their religious flag on an electronic pole. There is a temple nearby. Clashes broke out after another local group went to convey how their religious sentiments were hurt.”

Reports suggest that after the Muslim youth were stopped, around 100 people gathered at the spot. There was a communal clash between both sides. Stones and sharp weapons were used by the mob. Private vehicles and shops were vandalised during the clash.

Savli sub-inspector A R Mahida said, “It soon snowballed into clashes, and both the communities started hurling stones at each other. Nobody was injured, but a vehicle and a shop were damaged by rioters.”

A senior police officer told Indian Express, “The minority community has a festival coming up soon, and therefore, a local youth group had put up flags on bamboo sticks, fastened to the electricity poll. It did not go down well with other groups as there is a big festival coming up Wednesday in which the majority community has also planned a huge procession. Many rioters were nabbed immediately, and they have also identified other miscreants from the footage.”

Additional police force has been deployed in the area to maintain law and order.