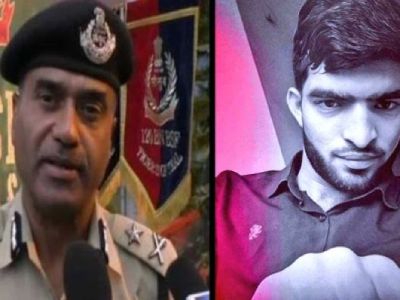 A day after the brutal murder of Jammu & Kashmir DGP (Prisons) Hemant Kumar Lohia, the police arrested his house-help, Yasir Ahmed, on Tuesday (October 4). It must be mentioned that the accused was absconding ever since the incident.

In a tweet, Jammu and Kashmir Police informed that a massive search operation was undertaken to nab the accused. “In a major manhunt launched by J&K police throughout the night, the accused involved in (the) murder case of Shri Hemant Lohia has been apprehended,” it said.

In a major manhunt launched by J&K police throughout the night, the accused involved in murder case of Shri Hemant Lohia has been apprehended. Interrogation of the accused has started.

The cops further stated that Yasir was being interrogated by them in connection to the case. The accused belongs to the Ramban district of Jammu and Kashmir.

DGP Lohia was found dead under mysterious circumstances with a throat slit and burn marks on his body on October 3. Yasir, the primary suspect, was captured on CCTV, running away from the crime scene. He was working at DGP Lohia’s residence for the past six months and was reportedly quite aggressive in his behaviour.

So far, no terror act is apparent as per Initial investigation but thorough probe is on to rule out any possibility. The weapon of offence has been seized besides some documentary evidence reflecting his mental state.

It is believed the killer first suffocated Lohia to death and used a broken ketchup bottle to slit his throat. He then tried to set his body on fire. Terror group People’s Anti-Fascist Force (PAFF), an offshoot of Pakistan-based terror outfit Lashkar-e-Taiba, has claimed responsibility for the murder.

In a press release, the terror group said that this was just the beginning of such high-profile operations. “We can strike anywhere, anytime with precision,” the statement read.

The terror group then claimed that the DGP’s murder was a ‘small gift’ to the visiting Home Minister amid such high security. “God willing we will continue such operations in future,” PAFF further warned.