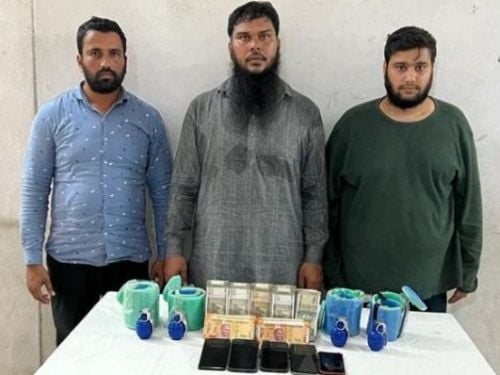 The Hyderabad police have thwarted a significant plot to carry out terrorist attacks in the city under the direction of Pakistan’s intelligence agency ISI. On Sunday 2nd October 2022, police arrested three accused in this case in Hyderabad. The police also seized four hand grenades, Rs 5,14,800 in cash and a motorcycle from the arrested accused.

The arrested accused are identified as Abdul Zahed (age 39, a resident of Malakpet), Mohammed Sameeuddin alias Abdul Sami (age 39, a resident of Akberbagh Sayeedabad) and Maaz Hasan Farooq alias Maaz (age 29, a resident of Humayunagar in Mehdipatnam). Abdul Zahed recruited the other two in this terrorist activity. All three persons were produced before the court and are being sent to judicial remand. It is notable that Abdul Zahed was earlier arrested for alleged involvement in a suicide bomb case in 2005, but he was released in 2017 for lack of evidence after spending 12 years in jail. The leftist ecosystem and liberal media had branded him as the victim of a false investigation. This time he is arrested with all the evidence including dangerous weapons like grenades.

4 hand grenades recovered from their possession. Zahed received these grenades from his Pak-based handlers. He was planning to hurl these hand grenades targeting public gatherings through his group members, thereby causing terror & communal tension in the city: Hyderabad Police

According to police, Abdul Zahed revived his contacts with his Pakistan ISI conduits after his release from jail and conspired to plot terror attacks in Hyderabad. His plan included blasts and lone wolf attacks to terrorize the common public.

This Mohammed Abdul Zahed (middle one) is the same guy who was released in 2017 due to lack of evidences and was branded as victim of system. @amnesty had provided him all help. https://t.co/MzPN6VwUA6

Hyderabad Commissioner of Police, C V Anand said, “Zahed received a consignment of four hand grenades and was going to carry out sensational terror attacks in Hyderabad. On specific information, the raids were conducted and three persons were arrested at Malakpet. He was previously involved in several terror-related cases in the city and was regularly in touch with Pakistani ISI-LeT (Inter-Services Intelligence and Lashkar-e-Taiba) handlers.”

Now Mohammed Abdul Zahed has been caught with evidence 😎 pic.twitter.com/vBu7JgPYLV

He further said, “Three absconding persons Farhatullah Ghouri alias FG, Siddique Bin Osman alias Rafique alias Abu Hamzala and Abdul Majeed alias Chotu all natives of Hyderabad and wanted in several cases are now settled in Pakistan and working under the aegis of ISI. In past, they recruited local youth and radicalized them, and got executed terror attacks such as a blast near Sai Baba Temple, Dilsukhnagar in 2002, a bus blast at Ghatkopar in Mumbai, and a Task Force office blast at Begumpet in 2005. They also attempted to cause blasts near Ganesh Temple Secunderabad in 2004.”

He added, “Zahed in his confession revealed that Farhatullah Ghori, Abu Hamzala, and Majeed revived their contacts with him and they motivated and financed to carry out the attacks. At the behest of Pakistan-based handlers, Zahed recruited Samuddin and Maaz Hasan. During search operations, four grenades were recovered from the trio. He was planning to hurl a grenade targeting public gatherings through his group members.”