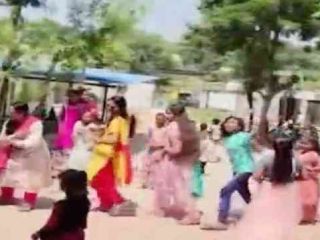 According to reports, students in the Play Center School of Hataj village in Nadiad, Kheda district, Gujarat, were made to perform Tajia instead of Garba during a function organised at the school. On September 30th, the school hosted a one-day Garba event. A Muslim teacher allegedly forced the children to perform to Tajia music instead of Garba.

Row after students were made to perform Tajia instead of #Garba in #Navratri celebrations #Nadiad #Gujarat #TV9News pic.twitter.com/wLesyP0hVR

Students were requested to come to school to play Garba, but Tajia music was played instead, and children were seen performing Tajia while wearing t-shirts with heretical names. Instead of performing Garba, the male and female students of the school were shown in the video banging their chests with both hands, as part of mourning during Muharram procession.

The residents submitted a memorandum to the district collector, urging that the guilty individuals be punished. Kheda, the president of the Hindu Dharma Sena, stated, “We presented a memorandum. Yesterday, a one-day Garba event was organized in a primary school in Hathaj village, Nadiad. Students were performing Garba, and a DJ system was playing. Meanwhile, the Garba came to a halt. There are Muslim teachers among the teachers at the school and we don’t mind this. But, the problem is that they abruptly stopped the Garba and began shouting religious chants. They provided the students with T-shirts having religious symbols on them.”

This incident is also said to be the work of the recently outlawed PFI. An investigation into why this planning was done and at whose request has been requested.

Tajia is derived from the Arabic word aza, which means to remember the deceased. It is usually performed by the Shia Muslims where they re-enact the death of Hussein, Prophet Muhammad’s grandson, in the battle of Karbala. Different songs are played and Islamic religious slogans are raised when Tajia is taken into the procession in Muharram.