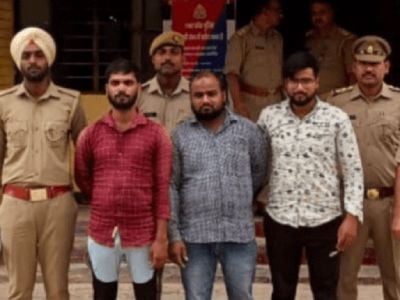 Days after the Central Government imposed a ban on the extremist terrorist organization named Popular Front of India (PFI), the NIA revealed that the PFI activists had plans to target the Hindu religious places and Hindu communities during the upcoming festivals of Dusshera and Diwali. They had plans to blast IEDs in several parts of India to eliminate the maximum of the Hindu population.

According to the reports, the ATS after the NIA and ED raids, arrested around 250 PFI jihadis and recovered several incriminating materials from their possession. The documents included a training module to make IEDs and bombs from available domestic material and also the ‘Mission 2047’ document underlining the PFI goal to make India the Islamic Republic by the year 2047.

Several digital devices and pen drives were also recovered from the PFI hubs located in around 17 states of the country to reveal their connection with ISIS and other terrorist organizations. The pen drives contained videos of Gajwa-e-Hind, the 1993 Bombay blast, and other armed training videos.

The NIA stated that specific documents relating to the explosives were recovered from three jihadis arrested from Lucknow, Uttar Pradesh. Reports mention that bomb-making material was also recovered from the three accused identified as Mohammed Faizan, Mohammed Rehan, and Sufiyan. The three had planned to execute blasts at several Hindu religious places during Dusshera and Diwali. The officials are interrogating the individuals and collecting further relevant evidence.

One of the most incriminating materials recovered from the accused during the raids was the manual on how to make IEDs. Titled ‘A short course on ‘How to make IEDs using easily available material’, the document suggested that if Muslim youth knows how to make bombs, it would bring ’empowerment to them’. The three paged document also defined five point objectives of the training which included-

The document further detailed the material to be used in the bomb, how to make it at home and how to maximise the effect of the bomb.

The document named ‘Mission 2047’ was also found in the possession of the PFI hideout which underlined the goal of the organization to establish the ‘Rule of Islam in India’ and to bring the Indian State and the majority of Hindus ‘to their knees’ when the country would complete its 100 years of Independence.

The document aims at destabilising the well-developed infrastructure of the Indian sub-continent and establishing Islamic dominance over the ‘coward Hindus’ and subjugating them. It aims at targeting Hindus and Hindu leaders to gain control over the country belonging to Hindus, popularly known as Gajwa-e-Hind.

The document which was shared by the PFI leaders with each and every member of the now banned organization feared the current status of Muslims in India and aimed at spreading the PFI roots to every household by 2047. The PFI paper showcased Islamists in India as victims and instigated their co-coreligionists to pick up arms for their ‘rights’ against Hindus.

The ATS last week arrested the PFI individuals from Varanasi, Lucknow, and Meerut for conspiring to break the country and form an Islamic nation by 2047. The ATS stated that these people were engaged in anti-national activities by preparing sleeper modules in the state.

The ATS identified 24 such accused associated with the PFI who were misleading the Muslims by setting rhetoric against the Hindu community in Uttar Pradesh. They also criticized the Central Government led by PM Modi and the state government led by CM Yogi Adityanath by calling it ‘an anti-Muslim government’. The ATS interrogated the arrested individuals on September 24 to learn that PFI had plans to also launch severe anti-Hindu protests like that of anti-CAA and NRC riots.

Reports mention that the arrested accused had plans to create riots in Hindu religious places like Kashi, Mathura, and Ayodhya. The officials have also recovered posters of earlier anti-Hindu riots with something marked upon them with a pen. Meanwhile, chats recovered from Sufiyan’s phone confirm that the PFI was planning to bomb a few crucial Hindu religious places during Diwali. The now-banned organization had also urged its members to increase the strength of the organization and fight in the course. It also asked for strong suggestions to implement the chaos.

Earlier, the investigating agencies had revealed that the PFI activists were deliberately encouraging the Islamists to trap Hindu women in love affairs and produce more children ultimately expanding the Muslim community. The PFI asked its cadres and other Muslims to force the Hindu women to convert their religion to Islam. At every PFI gathering, the activist would influence Muslims to run the agenda of love jihad and religious conversion.

The organization had also declared a financial reward of Rs 2 lakh, a shop, and a house to anyone who would convert a Hindu girl to Islam. Reports mention that several Islamic organizations from several Islamic countries provided funds to the PFI for this purpose.

The Central Government on September 27 banned the radical organization named Popular Front of India (PFI) and its associate organizations for 5 years. The government maintained that the organizations operated as unlawful associations under the Unlawful Activities (Prevention) Act (UAPA).

The ban on the PFI comes following two rounds of searches by the NIA in a multi-agency investigation against the organisation for allegedly sponsoring terror operations in the nation. The initial series of raids occurred on September 22, with a follow-up on Tuesday, September 27 in multiple states, resulting in the arrest of at least 250 persons associated with PFI.