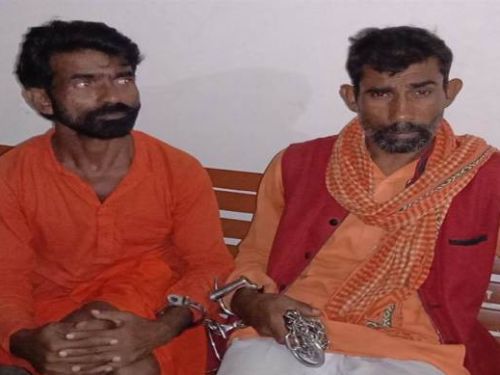 Chhattisgarh Police have apprehended two Muslim men who were reportedly scouting the streets of Gurur village in Chhattisgarh’s Balod district with the aim of stealing young children. According to reports, the men were dressed in saffron robes pretending to be Hindu Sadhus.

The cops on duty got suspicious of their whereabouts and approached them. The accused were instructed to establish their identities by reciting the Gayatri Mantra, a highly revered Hindu mantra, which they did not perform, raising police suspicions. Police threatened them after which they ultimately confessed to being Muslims.

The incident resembled a courtroom sequence from the Akshay Kumar-starrer film Jolly LLB 2, wherein the actor quizzes an Islamic terrorist who pretends to be a Hindu seer to expose his real identity.

One of the accused identified himself as Jhagroo, Musafir Jogi’s son, and the other as Yaad Ali alias Maale Sajjan. They both claimed to be from Nevada village in Pratapgarh, Uttar Pradesh.

According to reports, the Gurur police station had got information from a local informer that two people wearing saffron clothi were walking around the streets, appearing to be conducting a recce. Their actions seemed suspicious. The cops apprehended both of them near the bus stop and brought them to the police station for questioning. Inspector Vishwajeet Meshram stated that during the initial interrogation, both identified themselves as Hindu saints. They stated that they had been soliciting alms from the local residents.

The cops didn’t believe them and demanded that if they were Hindu saints, they recite the Gayatri Mantra and the Mahamrityunjaya Mantra. The two went numb when they heard this. A comprehensive inquiry revealed both were not Hindu seers. Meshram went on to say that during the interrogation, both of them admitted that they were on a reconnaissance mission to steal young children.

In a similar incident last year, a video surfaced online where three Muslims clad in saffron robes, are seen roaming around in an empty area when they are accosted by a man who asks them to reveal their identity. The youths, who are also carrying saffron colour jholas (hanging bags) and some instrument in their hands, at first attempt to steer clear of the questioning, but after the person shooting the video threatens them with the police, they confess of being Muslims.