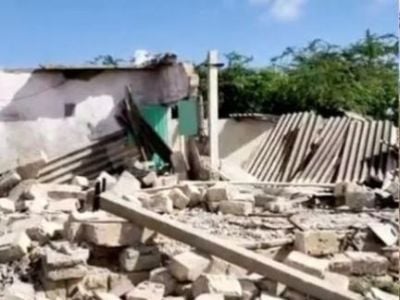 A mega demolition drive started on 1st October 2022 in Bet Dwarka of Gujarat. Religious and private commercial constructions on government lands were demolished using bulldozers in large numbers. In the first phase, a total of 15 encroached constructions were razed off. The operation was carried out in presence of a tight police force. Top officials of the department were also present in the area.

According to reports, the mega operation was jointly carried out by various departments including revenue, panchayat, maritime, police, and power supply department after receiving inputs that the recently banned radical outfit PFI’s connections are active in Bet Dwarka and illegal activities are being carried out by grabbing government lands forcefully under the name of religion. A convoy of 1000 police personnel was deployed for security.

Encroachments on government land in Bet Dwarka had increased in the last few years and recently Mazars and other religious constructions had started mushrooming on the roads. Due to this, there was a demand to remove this illegal encroachment.

Since yesterday, a police convoy was stationed in Dwarka and top officials including IG, 3 SPs, 9 DSPs, 20 PIs, and PSIs were also present. The action started on 1st October in the morning to remove encroachments by bulldozers in Hanuman Dandi Marg and the Balapar area of Bet Dwarka.

Bet Dwarka is a small island located in the sea near Dwarka on the western coast of Gujarat. The island is spread over an area of 11 kilometres. The main occupation of the local people is shipping and fishing. Security agencies constantly keep an eye on drugs, illegal gold, fake notes, etc. coming through the sea route from here.

Meanwhile, after the recent ban on PFI, action was initiated against PFI and individuals associated with the organization across the country. According to reports, agencies have become alert and initiated action after this connection came to light in Bet Dwarka.