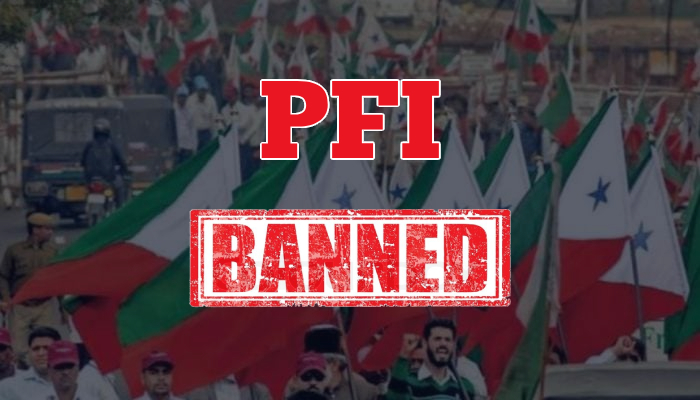 The Centre banned PFI and several other associated organisations for five years. In the notification, the Union home ministry said some PFI activists joined the Islamic State of Iraq and Syria and took part in terror activities there. In India, it engaged in violent acts like chopping off limb of a college professor, the MHA said.

The government of India has declared the Popular Front of India and its associates or affiliates or fronts as unlawful associations with immediate effect for a period of five years. The move follows two rounds of massive countrywide raids on PFI leaders in terror fund cases. In the notification, the Centre said the PFI is involved in several criminal and terror cases and shows sheer disrespect towards the constitutional authority of the country with funds and ideological support from outside, it has become a major threat to the internal security of the country.

We also request @ianuragthakur and the @MIB_India to direct all social media platforms to immediately de-platform PFI and affiliate accounts, cadres and sympathetic accounts to stop them from regrouping and furthering their anti-national agenda. #PFIBan
2/2

“…in exercise of powers conferred by sub-section (1) of section 3 of the Unlawful Activities (Prevention) Act, 1967 (37 of 1967), the Central Government hereby declared the Popular Front of India (PFI) and its associated or affiliates or fronts including Rehab India Foundation, Campus Front of India, All India Imams Council, National Confederation of Human Rights Organization, National Women’s Front, Junior Front, Empower India Foundation and Rehab Foundation, Kerala, as an ‘unlawful association’,” the notification read.

“And Whereas, the Central Government, having regard to the above circumstances, is of the firm opinion that it is necessary to declare the PFI and its associated or affiliates or fronts as an unlawful association with immediate effect, and accordingly, in exercise of the powers conferred by the proviso to sub-section (3) of section 2 of the said Act, the Central Government hereby directs that this notification shall, subject to any order that may be made under section 4 of the said Act, have effect for a period of five years from the date of its publication in the Official Gazette,” it said.

The government is of the opinion that there is no immediate curb or control of the unlawful activities of the PFI while they are continuing its subversive activities, disturbing public order, and encouraging terror-based regressive regime, the notification said.

“There had been a number of instances of international linkages of PFI with Global Terrorist Groups and some activists of the PFI have joined Islamic State of Iraq and Syria and participated in terror activities in Syria, Iraq and Afghanistan,” it said.

“Investigations in various cases have revealed that the PFI and its cadres have been repeatedly engaging in violent and subversive acts. Criminal violent acts carried out by PFI include chopping off limb of a college professor, cold blooded killings of persons associated with organisations espousing other faiths, obtaining explosives to target prominent people and places and destruction of public property,” it said.