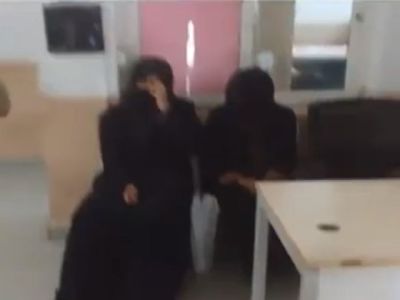 Two Muslim women were detained on Tuesday for reportedly vandalising the murti of goddess Durga at a Navratri pandal in Hyderabad. The ladies barged into a pandal in the city’s Khairatabad locality and smashed a portion of the Durga statue, according to Hyderabad Police.

When a local tried to stop her, one of the ladies attacked him with a metallic tool. Locals apprehended both ladies and handed them over to the police.

"It is extremely shocking and painful. These people should definitely be punished": @RahulEaswar@GrihaAtul | #Hyderabad #IdolVandalised pic.twitter.com/ES2CZIfzCK

DCP, Central Zone, Hyderabad, said, “In the morning we received a call that two ladies have tried to vandalize the mother Mary statue and later they also tried to vandalize the statue of Goddess Durga.” “One woman was also seen carrying a spanner and she tried to attack a local who tried to stop. However, locals caught both of them and handed them over to Saidabad police. We are trying to verify their details but they are behaving very weirdly. An investigation is underway,” the DCP further added.

The ladies also vandalised a statue of Mother Mary outside a nearby church, according to News 18. Damage to the murtis and the lion sculptures adjacent to the murti was also visible in pictures from the site. The authorities are now trying to figure out who the women are and what motivated them to do this. There are no additional specifics concerning the event because the accused are not even disclosing their identities. Police are investigating if the crime was carried out with the intent of inflaming communal tensions in the area.

OpIndia recently reported how ahead of Durga Puja, unknown vandals smashed Durga murtis at the Kashipur Sarbajanin Durga Temple in Mehendiganj Upazila in Barisal, Bangladesh. The leaders of Mehendiganj Puja Udjapon Parishad strongly condemned the incident and asked that those responsible face legal punishments. Nurunnabi, the Mehendiganj Upazila Nirbahi Officer (UNO), visited the site and gave orders to restore the temple so that it could be used for worship.

On September 8, Taufeeq Ahmed was arrested for allegedly damaging an murti of a deity at a Hindu temple in Lucknow, Uttar Pradesh. With a “tilak” on his forehead, Ahmed allegedly entered the temple gates and started smashing the murti of the deity while yelling “Jai Shri Ram.”