Basically Kashmir was and always will remain a holy place for Hindus. Kashmir was Hindu before Muslim invaders entered Kashmir and plundered the Hindu seats of faith. Now what right do these fanatics have to make such demands? Instead Hindus should demand that such fanatics should be ousted from our country! – Editor, Hindujagruti 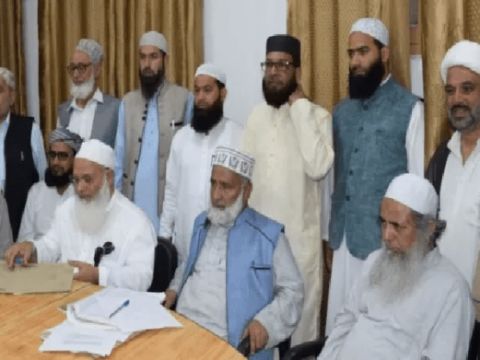 Muttahida Majlis-e-Ulema (MMU), a collective of around 30 Islamic religious and educational organisations in Kashmir, on Saturday urged the government and education department to stop practices like “singing of bhajans and Surya Namaskars” in schools as it was hurting the religious sentiments of Muslims.

The MMU, headed by Mirwaiz Umar Farooq, chief cleric of Jamia Masjid and Hurriyat chairman, expressed resentment against imposing acts in the name of “yoga and morning prayers” in educational institutions and alleged that Muslim students are made to chant bhajans and at times asked to perform Surya Namaskar.

“The MMU today held a meeting at Jama Masjid, Srinagar, in the wake of unfortunate attempts to undermine the Muslim identity of Kashmir by asking Muslim students in schools and educational institutions to sing Hindu religious songs and do Surya Namaskar,” the collective said in a statement. “These diktats hurt the religious sentiments of Muslims and create anguish in them.”

The row erupted early this week when a video of school kids in Kulgam, around 70km from Srinagar in south Kashmir, singing a bhajan, Raghupati Raghav Raja Ram, purportedly urged by teachers that went viral on social media.

Launching an attack on the administration and the central government, People’s Democratic Party (PDP) president and former chief minister Mehbooba Mufti accused the Bharatiya Janata Party of pushing its “Hindutva agenda in J&K”.

The MMU passed a resolution in the meeting and expressed concern over attempts being made to “weaken the Muslim identity” in the Kashmir valley. “MMU strongly regrets activities being implemented through schools and educational institutions aimed at furthering the Hindutva agenda in Kashmir,” it said.

The meeting notified the government, education department and concerned agencies that such activities will not be tolerated by Muslims in Kashmir as it is a direct challenge to their religious beliefs.

“As such MMU appeals to the government and concerned authorities to immediately withdraw its orders and stop these practices in schools and educational institutions, which deeply hurt the religious sentiments of Muslims and cause them grief,” it said. “This meeting also urged the parents that if their children are forced to participate in un-Islamic activities in government schools, they should withdraw their children from these schools and enrol them in private schools.”

MMU expressed satisfaction that Friday prayers and five daily prayers are now being allowed by the authorities at the Jamia Masjid in Srinagar, and people are not being stopped from assembling at the mosque. It appealed to the authorities to release its patron Farooq and end his house arrest so that he can pursue his religious obligations and duties.

BJP state spokesman Altaf Thakur said that they won’t allow fundamentalism to grow here in Kashmir. “There is nothing new what is taking place in J&K, and those who are raising questions on bhajans should first listen to them and then make statements, “ he said.