The National Investigation Agency (NIA) and the Enforcement Directorate (ED) on Thursday carried out nationwide raids against terror-funding suspects and arrested more than 100 Popular Front of India (PFI) activists. PFI Chairman OMA Salam and State president CP Muhammad Basheer were taken into custody from Malappuram’s Manjeri. The probe agency also arrested Delhi PFI chief Parvez Ahmed and his brother from Okhla at 3.30 am on Thursday morning.

A remand report was filed by the NIA on September 19 pertaining to the arrest of four accused after raids were carried out in Andhra Pradesh and Telangana. The report revealed that PFI is trying to plot terrorist activity and is giving training to PFI activists to identify and kill people from a particular religion.

Security has been beefed up outside NIA headquarters as reports suggest that a few of the arrested PFI personnel could be brought to Delhi. 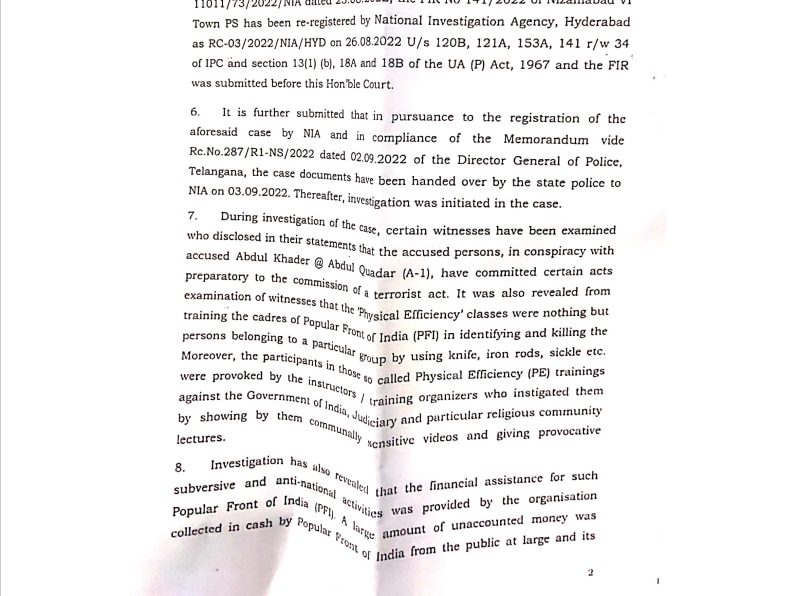 Raids were carried out in multiple locations, especially in South India, and were termed by the NIA as the ‘largest ever’ investigation process ’till date’. The probe agency carried out raids in as many as ten states and one Union Territory and arrested at least 106 people. Arrests were made from Andhra Pradesh (5), Assam (9), Delhi (3), Karnataka (20), Kerala (22), Madhya Pradesh (4), Maharashtra (20), Puducherry (3), Rajasthan (2), Tamil Nadu (10) and Uttar Pradesh (8).

These searches were being conducted in the residential and official premises of persons involved in funding terrorism, organising training camps and radicalising people to join proscribed organisations.

Sign Petition : Ban Popular Front of India (PFI) and all its affiliates for their antinational activities !

Here are the top developments of the story:

-PFI workers protested against NIA raid at the PFI office in Chennai as raids were carried out. NIA was conducting searches at 8 places in the Madurai city area including Villapuram, Gomatipuram, and Kulamangalam.

-According to sources, the NIA, ED and police officials from various states planned a co-ordinated operation which was started on the intervening night of Wednesday and Thursday. People associated with PFI and its related activities were picked up by the agencies.

-Six control rooms were set up for the purpose and monitoring was done by the Ministry of Home Affairs and Intelligence Bureau. The step was being taken to avoid any ruckus created by the PFI and to carry out monitoring.

-According to sources, PFI has been active in Delhi, Andhra Pradesh, Assam, Bihar, Kerala, Jharkhand, West Bengal, Uttar Pradesh, Karnataka, West Bengal, Tamil Nadu for several months. People associated with PFI were involved in the protests in the name of Anti-CAA and NRC across the country, sources said.

-Raids were also carried out in Kolkata’s Park circus area at Tiljala road. According to sources, four separate teams of NIA and ED left from the Kolkata office at midnight after conducting a high-level meeting. The NIA, ED conducted search operations at the residence of Sheikh Mokhtar who is an active PFI member.

-Sheikh Mokhtar is being questioned by the agency. As per sources, a flat of Mokhtar and an office of PFI are located in the same building.

-Recently, the MHA was made aware by the central agencies that PFI was covertly mobilizing funds through well-organised network in Gulf countries as a part of a criminal conspiracy. The proceeds of crime were secretly and clandestinely sent to India through underground and illegal channels and through foreign remittances into the bank accounts of sympathizers, office bearers, members and their relatives along with associates in India.

-This was being done as a part of a larger criminal conspiracy of PFI and its related entities to raise funds within the country and abroad to carry out various unlawful activities.

-PFI and SDPI workers protested against NIA raid in Mangaluru as raids were carried out in multiple locations.

-The name of PFI surfaced when NIA busted the Patna terror module where there was a conspiracy to establish Ghajwa-e-Hind. The agency also raided the Karate training centre in Telangana’s Nizamabad where PFI was allegedly providing training to operate weapons.

-The PFI connection also came to the fore in the murder of Karnataka BJP leader Praveen Nettru, which is also being probed by the NIA.The role of PFI in providing funding during the hijab controversy and recent protests is also being investigated.

-Activists of SDPI and PFI staged protests in front of their offices against the raid, asking the NIA officials to go back. CRPF personnel have been posted at Nellikai Road to beef up security. The road was completely closed by CRPF officials.

-In Tamil Nadu, NIA officials conducted raids at the PFI party office in Dindigul district as PFI members protested against it. It searched PFI office bearer houses at several places in Tamil Nadu including Coimbatore, Cuddalore, Ramnad, Dindugal, Theni and Thenkasi. Searches were also being conducted at the Chennai PFI State Head office at Purasawakkam.

More than 50 members of the PFI are protesting outside the party office against the NIA raid. pic.twitter.com/9jvCOEeZpp

-The ED has been investigating the PFI’s alleged “financial links” on charges of fuelling the anti-Citizenship (Amendment) Act protests in the country, the 2020 Delhi riots, alleged conspiracy in Hathras (a district in Uttar Pradesh) over alleged gang-rape and death of a Dalit woman, and a few other instances.

-The PFI, in a statement, said, “The raids are taking place at the homes of national, state and local leaders of PFI. The state committee office is also being raided.We strongly protest the fascist regime’s move to use agencies to silence dissenting voices.”

“Today the NIA raids are happening. A lot will come out,” he said.

Union minister Giriraj Singh said, “Law is doing its work. So I won’t comment on that. But I would like to say that PFI has been involved in anti-India activities. It is unfortunate that during the recent Phulwarisharif incident in Bihar where four PFI members were arrested, police tried to project it as a cultural organisation.”